What a chance! What a joy!
Daughters of Jesus

What a chance to be part of the celebrations organized to mark the 20th anniversary of the arrival of the Daughters of Jesus in Honduras! I am grateful to my Provincial who granted my wish.

My aunt Gemma Beaulieu being among the first arrivals in this country, it is a privilege for me to celebrate this happy event. Aunt Rita also lived 38 years in Honduras. And another chance, was to go with Rose-Aimée and five Sisters from Three-Rivers. Most of them speak Spanish, which will be helpful for me…… 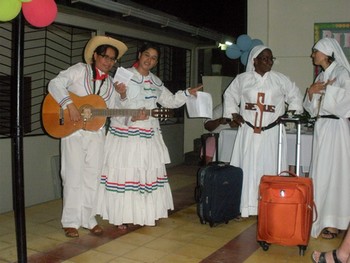 The celebrations begin with the Messagères de l’Immaculée who present us with a welcoming meal and an evening of commemorative events that marked this period. Sister Thérèse Normand is chosen queen among the nine «miss» presented in a very original manner.

The celebrations continue the following morning at mass in the cathedral of Choluteca. Various significant objects are brought in during the Offertory procession. Mgr Charbonneau pays homage to all the Daughters of Jesus who have worked in Honduras during the past 60 years.

He says that we are reaping the fruits of that presence, especially the founding of a new religious Congregation (of which my aunt was the foundress). The festivities continue at the residence of the Daughters of Jesus. After the departure of the visitors, we continue celebrating among ourselves with a delicious meal followed by an agreeable evening: songs, dances and puppets amuse us. We spend the following day at the seaside. How soothing it is to bathe in the warm waters of the Pacific! 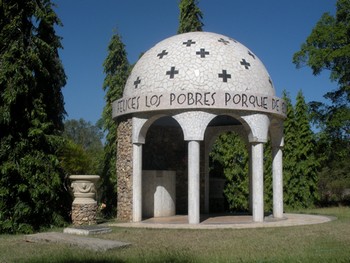 I continue my stay with the Messagères by going to pray on the tomb of my dear aunt. I am filled with conflicting emotions…. I visit the Collège Santa Maria Goretti, the first school where our Sisters had worked.

I also visit San Marcos, where my aunt Rita spent several years. The people remember her very well. Then I visit several houses of the Messagères where we find traces of my godmother. At the novitiate, I experience emotions of joy and happiness in my aunt`s room, where are preserved several things that belonged to her. The Messagères spoil me, with affection and attentions of all sorts, showering me with presents. Several touch my hands and my hair saying that it reminds them of their foundress. They teach me a song they composed in her honor. It seems that for them my presence is like a visit from my aunt. 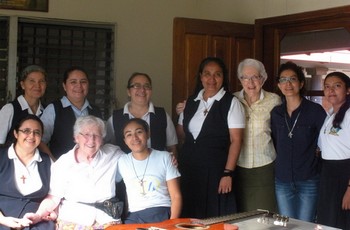 When departure time arrives they take me back to Tegucigalpa. We visit two of their hou 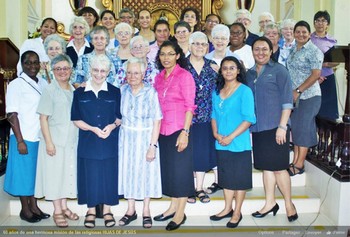 ses on the way and we stop to pray at the basilica of the virgin of Suyapa before arriving at the residence of the Daughters of Jesus.

At present, there are 38 Messagères; they have novices and postulants. I am so happy to meet them! I am also very happy to meet the young Daughters of Jesus from Honduras, Chile and Colombia.

Many thanks to the Sisters of Honduras who have received us so warmly! A special thanks go to Gelsomina and Deysi who have so well orchestrated the celebrations, the receptions and the voyages during our stay.

What a joy fills my heart!