Home › Who we are › Origins › Father Noury’s Project 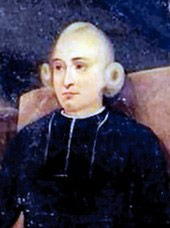 Pierre Noury was born in 1743 in Lauzach, a small parish in Morbihan in the diocese of Vannes, Brittany. He received a sound formation at the Jesuit college, and later at the Seminary in Vannes run by the Lazarists. He was appointed “rector” (parish priest) of Bignan in 1771.

A scholarly man of prayer, well acquainted with the Bible, his concern was that the faith of his parishioners be enlightened as well as fervent, in order to stand up to the trials he could foresee in a sombre future. Preaching was his main pre-occupation.

“To proclaim the Good News”, this he did with constant devotion to his parishioners who, moreover, elected him mayor of the town in 1790. Fr. Noury was close to his people, especially the poor and the sick, and was attentive to every need : comforting the suffering as well as inventing healthy diversions for youngsters. He wished he had “a hundred bodies” so as to be of greater service to his parishioners. 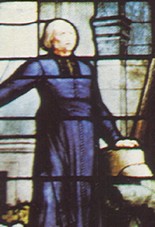 He drew up a project of “a house of piety and charitable work”, the running of which was to be entrusted to young women who would live together. This project would one day give birth to a congregation.

Events linked to the Revolution forced him into exile : in 1792 he set off for Spain, then Portugal. It was during this period that he composed most of his writings.

On his return to Brittany, in December 1801, to a diocese impoverished and torn by the consequences of the Revolution, Fr. Noury found his parishioners again for a short time, and was then named parish priest of the Cathedral of Vannes. He died in that town in 1804.