The migrants challenge us
Daughters of Jesus

The group “Daughters of Jesus in working class areas” met in Paris in November to work on the theme of how migrants challenge us. They give some echoes of their meeting. 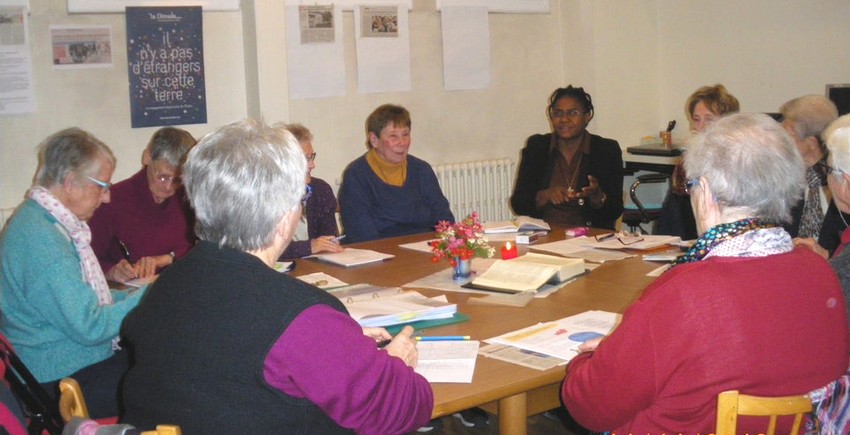 Twelve of us came together from Villiers-sur-Marne, Yerres, Saint-Quentin, Issy-les-Moulineaux, the rue d’Arras, Lorient and Vannes, along with the vice-provincial of Vannes as a representative of the Provincial Council.

The migrants challenge us.

As a group we meet migrants from many different nationalities – Macedonians, Russians, Syrians, Georgians, Armenians, Sudanese, Guineans, Afghans, Iraqis, Chechens – in the buildings and neighbourhoods where we live, and also in the structures where we are involved, the social centres, neighbourhood houses, and associations. These structures are places of reception, of listening, of troubleshooting, of emergency aid. They are where we link up and act together, where we are attentive to need and help as necessary. 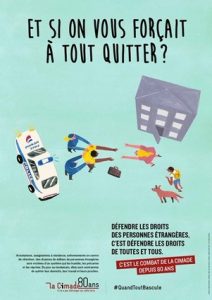 In these encounters and actions with migrants, we are confronted with the complexity of their personal situations, their country of origin, their history, and reasons for departure. We are also confronted with their status in France, whether as asylum seekers, unaccompanied minors, or undocumented migrants.

We learn about the difficulties of their life in our country. These include the lack of reception structures, the prohibition to work and the resulting lack of resources, their language problems. When they apply for a residence permit, they are faced with a complex administration. Applications are often refused which means that migrants become undocumented, without rights, and without a roof over their heads.

Volunteers in such a context have to invest a lot of time. Fatigue is compounded by a sense of powerlessness in the face of deadlock, which then generates anxiety. The lack of volunteers aggravates the situation, especially when it comes to housing migrants in private homes.

We feel the need to inform ourselves so that we can better know their countries of origin. Keeping up with France’s constantly evolving migration policy is another concern. We need training to better discern, understand and accompany the migrants, also to make known and defend their rights. These include the right to move, to be housed, to be looked after. The problem of people smugglers still arises.

What good news is there for us in this journey with the migrants?

Partnership can be a force for action, mutual aid and resistance. Collectives, associations, groups of associati

ons are being created almost everywhere. One example is the “anti-waste and solidarity fridge” which has been installed on the ground floor of a block of flats in Saint-Quentin. Here, anyone can drop off or pick up food.

Neighbourhood Houses can be “link” places thanks to the people involved there and to intercultural celebrations and projects such as “School and family” or “Strange strangers”.

These contacts promote the dignity of migrants and their savoir-faire, while respecting different cultures through equal exchanges, music, or traditional cuisine.

This sharing enriches us and makes us more human. It helps to change our outlook and break through our resistances, our certainties, our a prioris.

“There are no strangers on this earth.”

“The swallow comes from which continent?”

(Title of a St-Quentin show)

Living with this global perspective calls for openness to others. Examples of this are : 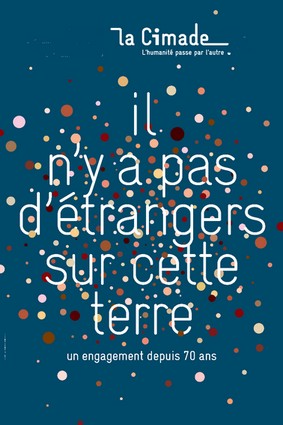 – the accompaniment of people of foreign origin in the catechumenate programme.

– the creation in Lorient of the “Bethany” daycare centre, an initiative of the collective of Protestant and Catholic Churches, the Secours Catholique and the Society of St Vincent de Paul.

– the questioning of the pastoral council by the CCFD (Catholic Committee against Hunger and for Development) of St Quentin.

Protestants and Catholics carry out joint actions in associations that accompany migrants. Interreligious activities are becoming a reality. These include a meal in common at the end of Ramadan, a “walk without borders” in Vannes towards places in the city with a spiritual character (churches, a Catholic house of welcome, mosques, Protestant churches).

We have responded to requests from associations to help with :

– the reception of Syrian refugees from Lebanon in Vannes and Le Rheu. Chains of solidarity have been created to help with administrative procedures, learning French, health, finances, leisure activities.

– the reception and accompaniment of isolated migrants who are minors in Kermaria. Solidarity is played out and relationships are created.

This partnership stimulates a culture of encounter. The Chapter acts of 2016 nourished our meeting in Paris and its preparation.

Born today from the fire of charity,

here and there we are taking on new colours

and setting out on new paths.

The following points emerged from our exchanges :

Listen to the source within you

The example of our founders, our charism and our Rule of Life impel us to go to those places that Pope Francis calls the “peripheries”.

Towards a Church without Borders”