After 116 years of active presence in the parish community of Notre-Dame du Lac, the Daughters of Jesus regretfully leave this beautiful spot. On the 150th anniversary of the parish, the Sisters were invited so that the parishioners could honor them for their contribution to the area. This event is highlighted for us by Bibiane Mailloux and Ursule Beaulieu. 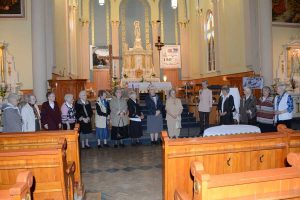 On May 1, 2019, approximately 15 Daughters of Jesus gathered from different sectors to celebrate with the parish folks. They were warmly welcomed at the church in front of the altar of Saint Joseph. The Sisters are known for their great devotion to this silent protector and for communicating this devotion to many generations of the faithful. To create a festive atmosphere, some people wore the ceremonial dress of the time.

Many speeches emphasized the recognition and gratitude for the Sisters’ involvement, dedication and devotedness throughout the years. The parishioners thanked all the Daughters of Jesus who lived at Notre-Dame du Lac. They underlined the difficult beginnings in setting-up the convent and the colossal undertaking of building a hospital. The people have not forgotten the Sisters’ work at the hospital, the Boarding School, the Immaculate Mary School, as well as the multi-purpose school at Cabano. After their retirement the Sisters were involved in liturgy, in visiting the sick at the hospital and the Retirement Homes. They have always been close to the people in all fraternal simplicity. They have left beautiful memories behind them. Specially recognized were Sisters Jacqueline Bujold and Jacqueline Michaud, who, following their retirement from teaching remained present and active until their departure for Rimouski just a few years ago.

A special tribute was paid to our Sisters Fernande Gagnon, Laurette Francoeur and

Aline Bourgoin who were the last ones to leave Notre-Dame du Lac in May 2019. We are grateful to them for having held the torch for so many years.

We shared a hearty and fraternal meal with some priests who came to celebrate as well as several people from the parish organizing committee. During the afternoon we had the opportunity to move around and meet the folks of the area…. a welcomed occasion to reconnect with the acquaintances of days gone by. 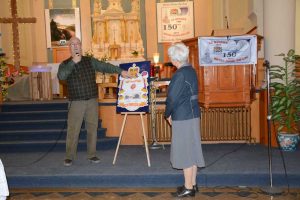 During our fraternal sharing we were invited to recall some memories or to give a testimony. Several people spoke up…among whom was Ursule Beaulieu, who hadn’t worked there but whose mother stayed at the convent of the D.Js from 1922 to 1924. She was among the first group of students to obtain her diploma for higher education. She had known Mère Ste-Agathe, Mère Ste-Germaine and Mère Ste-Hermine then a young nun. Many were the times when she spoke to us, her children, about the good old days at the convent!

A Time for Thanksgiving 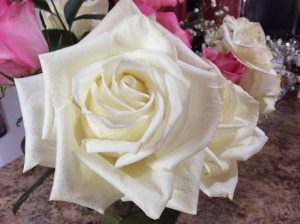 this month of May. A thanksgiving Mass was celebrated to the intentions of the Daughters ofJesus. During the celebration five white roses were offered in memory of the five sisters who died in a car accident in 1963… a very impressive moment.

After the usual good-byes each Sister returned to her community, heart filled with gratitude towards the Lord for the work accomplished by so many Daughters of Jesus since 1903. A sincere thank you to all the participants for such a wonderful day!