“Know who you are”
Daughters of Jesus | Our life

On the occasion of the anniversary of 50 years of Union between the Sisters of l’Action de Grâces of Mauron and the Daughters of Jesus of Kermaria, we invite you to journey with Virginie Danion, foundress.

Torn between fears and confidence 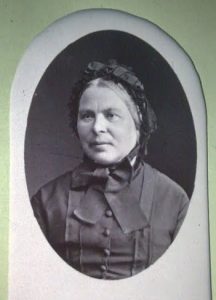 Virginie, born on October 14, 1819, came from a patriarchal household of four girls. Her parents lived their faith in the austere context of the time and Virginie was marked by the fear of sin and hell. Early on, at the age of 8, she became seriously ill. Convinced that because of her childhood mistakes she deserved hell, anguished, she alternated between fear of demons and trust in God. At the age of 10, she made her first communion, the first meeting with Jesus in communion, with piety and humility. 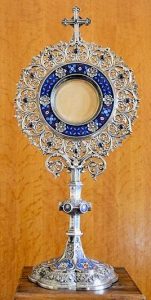 At the age of 14, she had a decisive experience: she received an exceptional grace in the church of Ménéac:

“ Eyes fixed on the Host, I felt my heart ablaze with an unknown fire.

If only the Lord could be worshipped always

and thanked for giving himself to us in his sacrament.

However, black thoughts come back to haunt her. To distract her, her worried parents brought her to Rennes to complete her education. She returned home when her older sister entered the Ursulines. With the agreement of her spiritual director, she made a vow of virginity at the age of 27. Her parents wanted to keep her close to them, especially after the marriage of their third daughter. Torn in her inner desires, she went to consult the Bishop of Vannes who invited her to leave: ‘Go like Abraham without knowing where…’

Virginie went up to Paris, entered Carmel in November 1849 and then, a month later, the Sisters Réparatrices du Saint Sacrement.In September 1850 she took the habit and became Sister Anne However, she already had a strong intution:

“ Happy although this spirit of reparation was contrary

to my inner disposition …

and the graces that rained down on the earth.”

« This heart on fire for the Eucharist» 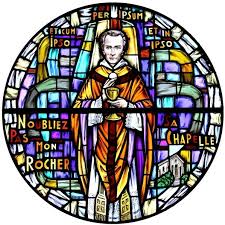 Sent as superior to Lyon she there made a decisive encounter with Father Pierre-Julien Eymard Like her, he was searching. Raised in a family tinged with severity and fear, little by little, he understood that the Eucharist is the pinnacle of everything, that worship, praise, thanksgiving must be our essential duty.

But not everyone agreed with Sister Anne; she was suspected of diverting the young women from their vocation of Reparation to lead them to Thanksgiving instead. The breakup became final. In vain she tried approaching other congregations, but none succeeded. She returned to Mauron on July 4, 1851.

The Association of Thanksgiving

In the same vein, she was seized by the Word of God: The healing of the 10 lepers, only one of whom, a Samaritan and a stranger, came to thank Christ. This dimension of Thanksgiving seemed essential to her. After informing herself, she organized Perpetual Adoration in Mauron which then led to the founding of L’Association de l’Action de Grâces de Mauron on March 19, 1858, on the feast of Saint Joseph to whom Virginie had a strong devotion. From its beginning until 2010, the Association has had 6710 members: bishops, priests, religious, laity, mainly from France, but also from the Netherlands, Ireland, Jerusalem, Italy and Spain. 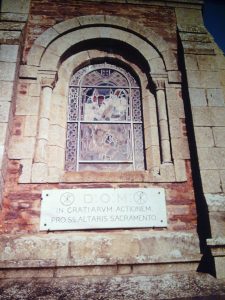 Thanks to an inheritance following the death of her father, Viriginie Danion had the chapel built and blessed on November 26, 1870. Virginie thought of ceding it to an Association, but the Bishop of Vannes convinced her to keep it.

Virginie then had a sudden enlightenment and made a commitment:

“I vow and dedicate myself to thanksgiving and perpetual adoration, according to God’s plan and in whatever way he will want.”

She chose her name, Mary of the Blessed Sacrament but the Bishop of Vannes recommended that Virginie wait for God’s hour. In 1877, during a retreat, she finally decided to found the House of Thanksgiving. The Bishop of Vannes gave his authorization and a location was chosen for the institute, the Danion House in Mauron. The convent was completed in 1881; and Virginie said, “I spent my days at the foot of the tabernacle and in loving care of my dear mother.” who died in November 1881. 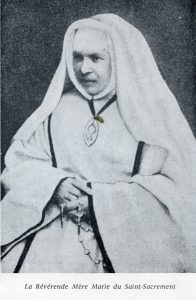 Virginie and four other companions took the habit on November 21, 1883. After a year of novitiate, Bishop Bécel received the vows of Mother Mary of the Blessed Sacrament and her sisters on November 27, 1884. The small group began its mission in the Church. The work could finally become what it was intended to be: cloistered and contemplative. They based their lives on the simple and hidden life of Nazareth, engaging in various activities for their livelihood. 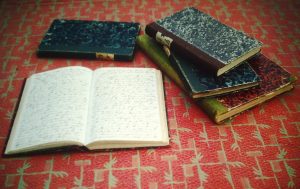 Grace continued its work. Mother Mary of the Blessed Sacrament adored, thanked, and formed her “Daughters”. Cancer soon began to drain her energy and she died on January 21st, 1900. But her thoughts remain: manuscripts of her meditations, her memoirs; a whole series of life-giving documents. 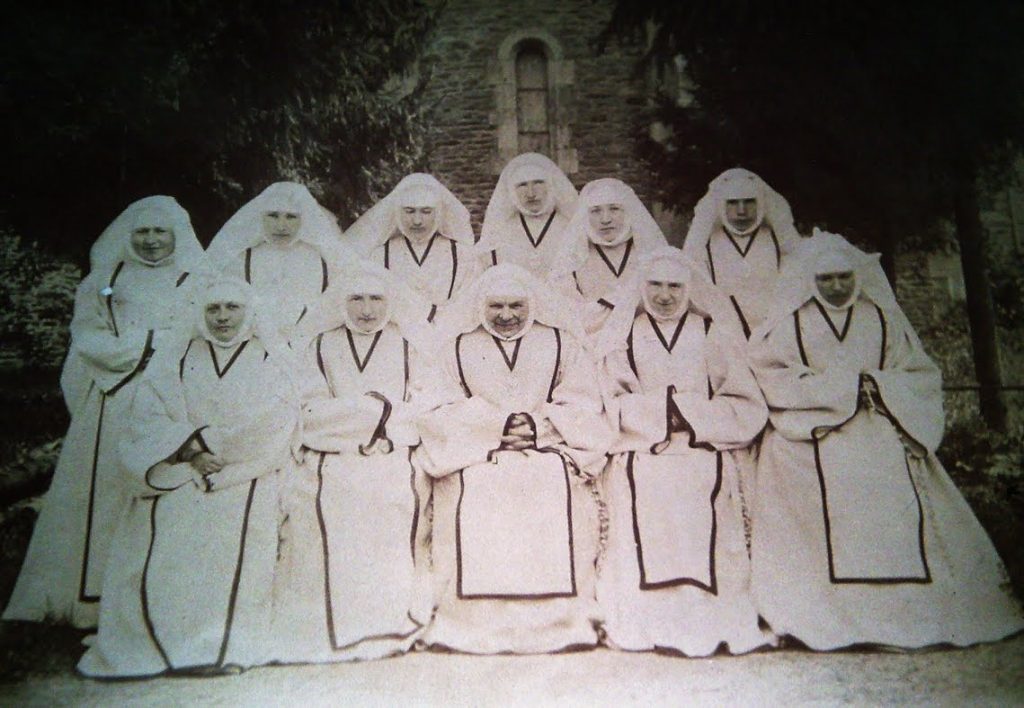 Through a series of encounters, through diverse and more or less happy experiences, through her questioning, Virginie Danion progressed as a pilgrim of love. She was able to take advantage of all that she considered to be grace as a sign from heaven, as a gift of God. The combination of prayer and eucharist found the right note in an immense and harmonious blend of praise and thanksgiving.

“Adoration will be our first duty;

thanksgiving will be our vocation”.

The Community and the Association of l’Action de Grâces are two flowers on the same stem, to say “Thank you” and to learn to say it.

The Sisters of the General Council