The Easter of Cecilia Cid
Daughters of Jesus

Our dear friend, sister, and Associate, Cecilia Cid, of Tucapel, Chile, passed away on May 28th. She was 60 years old and was still full of life on March 23rd when she participated in the animation of the annual retreat of the Associates. Here is what she was and has been for all of us.

On mission right to the end 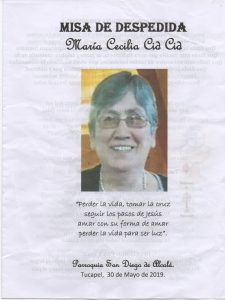 When Cecilia knew that she had incurable liver cancer, two great currents of energy ran through her: her trust and abandonment in the Lord and her readiness to fight with the help of natural medicines. She was brave right to the end and knew how to prepare those close to her in the face of her possible departure.

It was on our return from the sector meeting in Colombia that we learned that the Lord had welcomed her to Him. During five days we were able to accompany her son Claudio (himself an Associate) and all the affected individuals and families and be there for her funeral.

Recognition of her service, carried out “in the manner of Jesus”

Despite the heavy rain, the cold, and very strong wind, there were as many people present at her funeral, as there had been at the celebration of our 50 years of presence in Chile in January 2018. People came from all over. The church was full and many people had to remain outside. Six priests celebrated the Mass and at the end carried out her coffin themselves: a very significant gesture given that she was a woman. She had been the parish secretary for 25 years. During the funeral, we recalled her preferential love for the poorest and her struggle for more justice and dignity.

Cecilia had always been a very simple woman, who had almost learned to read with the Gospels. From the moment that she knew Jesus, she lived passionately for Him and His cause. She showed it in her guitar playing and singing, the parish choir, in her accompaniment of bereaved families, during celebrations, as a minister of communion. Her other activities included radio broadcasts, sports clubs, the development of her neighbourhood and politics

The Associates, fruit of slow germination! 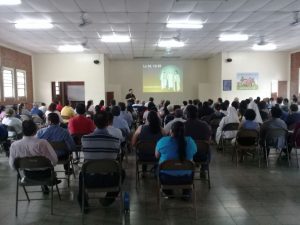 Cecilia was one of the first people to discover and want to live the charism. In 1982, she expressed the call that she felt to be a Daughter of Jesus, even though she had a little boy. She met Sister Helen Martin in Tucapel and told her of her desire. Helen told the community, that she had invited her to carry this call in her prayer and to reflect on the possibility of forming a group. At the time, other lay people in Trois Rivières, Canada, had expressed the same desire. The answer to this call was the “fruit of slow germination”. In 1993, during the celebration to mark our 25 years of presence in Chile, three groups were formed: Tucapel-Huépil, Chillán, and Santiago. And so the Associates were launched in Chile, Latin America!

Cecilia always had a special affection for “Mother St. Angèle”. She was a member of the great family of the Daughters of Jesus and will surely continue her mission with us and the most deprived. Thank you, Cecilia.