Michel, a new permanent Deacon for the Church of Vannes
Associated life | Daughters of Jesus 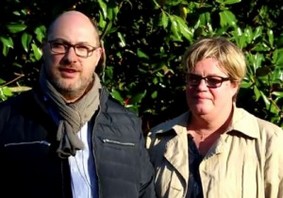 an Associate of the Daughters of Jesus,

was ordained as a permanent Deacon

Colette Le Chaix, herself an Associate, interviewed him about his journey.

Colette Le Chaix : Hello Michel ! Can you tell us something about yourself?

Michel Boscher : I was born in November 1967 in Lorient and baptized in December of the same year. I am the eldest of four children of a working-class family where the values ​​of solidarity, fraternity, friendship, service and courage have been present in times of joy and of sorrow. Married to Marina in 1997, we have 3 children, Matthew, Thomas and Anna.

Since 1993, I have worked at the Maison Saint-Joseph in Quimperlé, a care and rehabilitation facility created in 1965 by the Sisters of Kermaria. In 2004, I was appointed as director by the board of the association that manages the establishment. 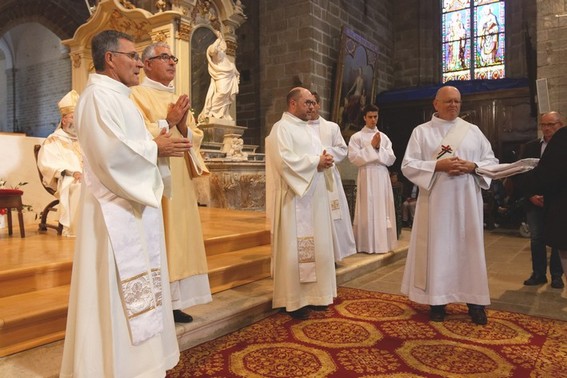 C : Can you tell us about your journey of faith?

M : My great-grandmother from Trégunc (Finistère) was my first faith « witness ». My faith has also been nourished by my commitments :

and of course, the various meetings during the preparation leading up to the permanent diaconate were a highlight in this faith journey. 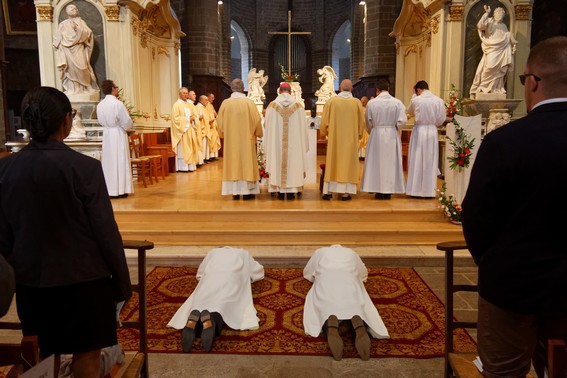 C : Michel, had you always thought about becoming a permanent deacon?

M : Not at all. The journey began with a phone call in early 2015. Michel Audran, our parish priest, wanted to meet with Marina and myself, to reflect together on the diaconate. A few weeks later we began a period of discernment.

C : Can you tell us what’s involved in this period of discernment ?

M : We attended three meetings with two other couples and diocesan « companions ». They gave us a presentation on the history of the diaconate through the centuries and the missions of a permanent deacon in the Church today.

C : So from there on you started on the training ?

M : Marina and I started the three-year training in September 2015. We met on a Sunday every two months and studied a different theme each time : the sacraments, the role of the deacon in announcing the Word of God , the study of texts of Paul VI and Benedict XVI.

In December 2016, we formed a support team of 15 people from very different backgrounds, to accompany us and help us deepen our thinking. You yourself Colette, helped us a lot with your own questions.

C: And after three years …

M : After reflection with Marina and our children, I wrote to Monsignor Centenne to tell him that I was avai lable for a call to the diaconate for the service of Charity, Prayer and the Word.

The official call took place on June 10, 2018 in Vannes, followed by the ordination to the diaconate on Sunday October 21st. At the end of a celebration full of emotions, solemnity and joy, I received the following missions

-To participate in parish life through the exercise of the diaconal ministry in the parish of st Thérèse in Lorient.

In order to help me fulfill these missions, I have taken a quote from Mother Marie de Saint-Charles

“Trust, Courage, Love, wherever you go”.

A new stage in my personal life, and in my life as a couple and family begins now. At the same time, I took care to reassure Marina and the children in my word of thanks read out at the end of the celebration : 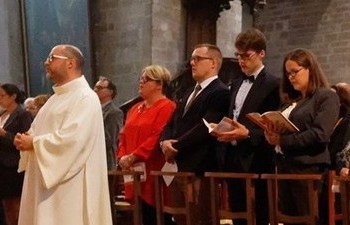 who is a deacon

I would liketo thank very sincerely all the people – family, friends, Sisters, associates, parishioners – who accompanied and supported us by their presence, their messages and their prayers. 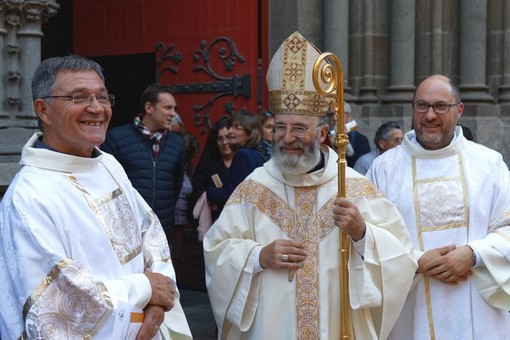