Love is ageless and has no bounds (continued)
Daughters of Jesus

A few months ago a text from Sr. Cécile was published on our Web Site. We were told that many of our readers were impressed by our Sister’s testimony about her friendship with a certain prisoner.

Following a conversation with Sr. Cécile, we thought you would appreciate an echo on the follow-up of this beautiful story involving: 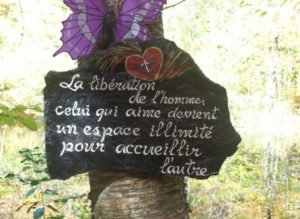 which have produced a real miracle in changing this man’s life.

Presently, for him, Sr. Cécile is “the greatest gift he has received from God.” Thanks to her he has become aware of the importance of who he is as a human being. Despite all his past mistakes, he is able to move forward. His encounter with Sr. Cécile has helped him to foresee the future with confidence: the sufferings he endured in his childhood and adolescence are responsible for the man he had become, given all the love he had lacked so much.

This relationship totally changed him. His acceptance to open up during his therapy sessions now allows him to be a support for others by showing them that they can advance in life regardless of their past experiences. He invites them to pray from the depths of their hearts since “the Lord is tenderness and pity” and He loves them! 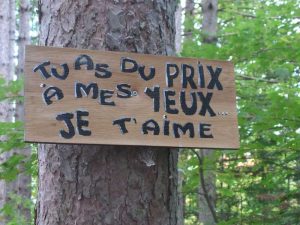 Before his therapy, he did not want to see or hear from any of his relatives. He was just too ashamed. One day his prison officials suggested that he get in touch with family members. He then remembered a thirteen-year-old cousin who had once said to him,” I’ll take care of you when I’ll have my own home.” As he had never forgotten that, she was, therefore, the one he wanted to see first of all.

This meeting was really a godsend. The long-distance undertaken for this visit was proof enough of their love for him. It was so life-giving!

On the advice of his councillors he asked to be transferred to a prison closer to his home to facilitate family visits. Since the authorities granted him this request, he will be transferred to his new prison in the near future. If he keeps on making progress he will soon be eligible for parole. Presently, he works in the kitchen and in the dining room and finds it very fulfilling to give a helping hand to those around him.

What a transformation in this man!

He now continues on his way, heart full of gratitude to God for the beautiful gift he gave him in the person of Sr. Cécile. He hopes to cherish this friendship with her for many years to come.