Former pastors joined the present pastor of the area to concelebrate with our Archbishop Denis Grodin. At this solemn mass some of the Daughters of Jesus who were present joined the parish choir and Pierrette Côté, one of the foundresses, directed the choir as she formerly had done. During the celebration, a few symbolic objects one of which was the Daughters of Jesus’ mission statement, were brought up at the offertory and presented to the assembly.

In the tribute that was given to them we can read the following: 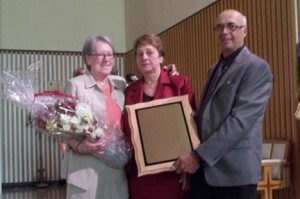 “The Daughters of Jesus have marked the history of Saint-Noël in many ways. They worked in the fields of education, pastoral ministry, liturgy, church choir, volunteer services, and I would even say in the area of psychology since, discretely and with respect for each person, they have given much beneficial advice. They have given and continue to give many noble services to our community.”

“The Daughters of Jesus are simple women, open to today’s world, sensitive, attentive to human misery, to contemporary problems and to the needs of the poor and the most deprived.”

“To all of you who have worked for the spiritual welfare of our parish, we say a warm THANK YOU for the generous gift of yourselves to our people and to those in the surrounding areas.”

“We wish you good health so that you can pursue your remarkable work here and elsewhere. We hope that what you have sown so nobly in the hearts of our people, takes root and flourishes forever.”
“Bravo for the work accomplished. And congratulations on this fiftieth anniversary which we have the immense pleasure of celebrating with you today. We also honor all those who have left us for a better world.” 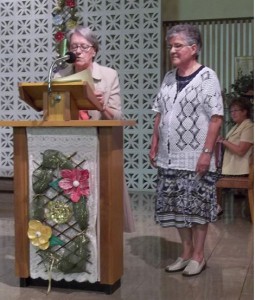 Among the 34 Daughters of Jesus who have worked at St-Noël, 25 are still living. One of them, Solange Mailloux, continues the mission of her predecessors in her commitment to the people of this area. Her mission consists in giving help and support to the persons committed in the various areas of pastoral work, in discovering new ways of living church, in living the Christian values of welcoming, listening and fraternal love in solidarity with everyone. Her concern of bringing together the people who wish to reflect on the word of God in order to apply it in their daily life leads her to bring particular attention to the various groups such as the Adaces committee, the choir, the prayer and adoration groups. She also gives support to the Church committee which, among other things, brings comfort to the sick, the grieving and those who suffer.

Souvenir plaques were given in recognition and appreciation of the mission accomplished by the congregation.