Sr Madeleine Lambert from Trois-Rivières, Canada, speaks to us about her participation at a gathering of the First Nations Peoples of Quebec and Labrador. For her it was an important moment of recognition and empathy. 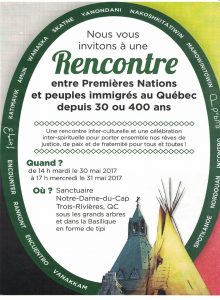 We were approximately a group of 500 persons including 250 indigenous peoples from Quebec and Labrador (http://www.apnql-afnql.com) gathered together to spend two days in a beautiful natural setting and in the crypt of Notre Dame du Cap Basilica, Three Rivers, Canada.

We listened to Hurons, Alconquins, Abenakis, Crees, Mi’kmaqs, Innuits, Atikans, expressing themselves in honesty and clarity on their experiences of

exclusion, rejection, as well as the denial of their identity, culture, knowledge, spirituality and expertise.

They also shared on their struggle to preserve their language, their customs and their projects.

A history of injustice 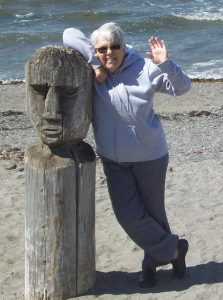 Sharing their life during two days and especially during a workshop called the “blanket exercise”, I felt in my whole being the great injustice we had done to these peoples as we pushed them further and further away on “reserves” and took their children by force to send them off to boarding schools, etc.

During an entire day, I participated in a POW WOW (a large get-together) of the Abenakis in Odanak on the southern bank of the St Lawrence River.

Being there for them 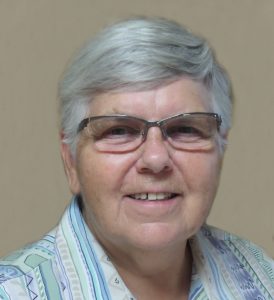 I have the opportunity, now and again, to go to their meeting place, not far from Kermaria. I feel comfortable with our indigenous peoples and I hope to become involved with them on a regular basis in this “periphery” so close to us and yet so different. I hope to receive abundantly from them and to be

a flaming fire among them in the manner of Jesus,

to warm their hearts, enlighten their paths and reveal to them the great tenderness of God’s love.