Christmas time speaks to our hearts by reminding us that God had a dream. He dreamt of mankind living as free and dignified human beings, as they discovered in the little baby Jesus a sign of the immense love of a God who came for all. “The Incarnation”. Our Sisters in Chile retell this dream for us in an imaginative way. 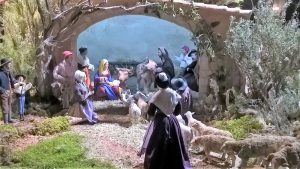 Suddenly God felt restless! As He looked around him, it seemed to him that something was missing from his Creation… But what?

« I am God », he said to himself, « I am Life, I am Love, I am Spirit, I am the Father of a very dear Son. Millions of centuries ago, I called mankind to the earth … “man and woman”, my master work. However at times, they don’t respond well to me. Iit seems to me that there is something missing in mankind. »

God was turning all this round in his head when He met the Son.

The Son said to Him, « Father, I find that very worrying … because mabye something is missing in us too”.

The Spirit passed by and stopped when He heard the Son … just as the Father opened his eyes so wide that the Son could be seen in them.

« I believe », said the Son, « that we and mankind are “complementary”, but we have not made real contact with them and neither have they with us. Both of us are missing something. »

The Father wrinkled his forehead. « Could it be that I did not fashion my creation well enough ? » 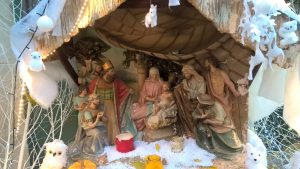 « No Father, everything you did, and continue to do, is very good, but there is something that Creation still does not understand or does not know. I have a suggestion for you … that I become a man, like all men … that I live among them and bring them the message that God loves them so much that He has sent his Son to be one of them … so that they may know once and for all how much you love them … and I will try to show them with my life, that they too are your sons and daughters … that You are their Father. Then your love will spring up in their hearts and they will know that they are sisters and brothers to each other. »

« With your help and your Spirit’s help, I am ready to do your Will, even to giving up my life for them, for love of you and them. »

The Father was thoughtful. After a moment he said, « I think you are right, Son. But you couldn’t just appear like this on earth, a ready-made man. You would have to go through all the stages of a man’s life, and truly live them out. » 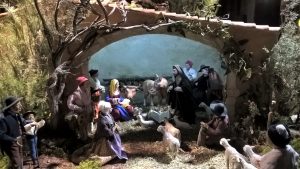 The Spirit who was listening to all of this said, « You are right, Father, and I believe I have the solution. I know a woman who is very beautiful and very pure, I have prepared her for a long time now. She has a heart big enough to love and serve. I think we can ask her to be the Mother of the Son of Man. She lives in Nazareth. »

Suddenly, everything became clear in the Father’s head. He called his best Messenger, Gabriel, the Messenger of the Good News. He told him what he wanted and added, “Give her my regards. Tell her that she is my Chosen One, and that she will be filled with my Grace and my Spirit. »

Gabriel arrived at Myriam’s home, the humble woman chosen by God, so that this “real contact”, the symbiosis, this total union between God and Humanity, might become possible.

Of course, Myriam was very surprised by this visit, she who was so humble, but always so open to God. She accepted his plan of salvation when she said, « I am the servant of the Lord, let it be done to me according to his Word. » 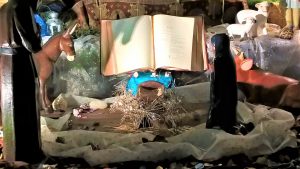 And so the Word became flesh, and Jesus became Man among men.

“Aah », said God. « Now Man is my masterpiece. My Spirit who turned in the Creation has made re-creation possible because now He lives in my Son, who is both God and Man. Let all men and women participate fully in my divine life and be active disciples of my Kingdom. I love those children so much and I always see my Son in each one of them. »

Long live God! Long live Jesus! Long live the Women and Men of all times and all places!

May each one of us allow the Life of God given to all to be reborn in his or her heart,

because that is how the Lord is born every day!