Geneviève – a Saint for today
Daughters of Jesus

Rhona Burns, a Daughter of Jesus in community at the rue d’Arras, tells us how the patron saint of Paris has led her in her footsteps. This astonishing personality of the 5th century is still able to speak to the consecrated women of the 21st century. 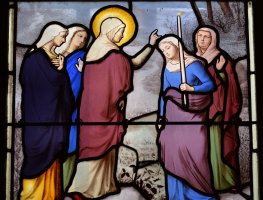 The Daughters of Jesus are not the only ones to celebrate an “Anniversary Year” in 2020. Here in Paris, we have just begun to mark the 1600th anniversary of the birth of Saint Geneviève, the patron saint of the city, the diocese and the gendarmerie. She will be at the centre of a whole series of celebrations and events. At first, I admit that I was a bit sceptical about all this attention and devotion. I wondered what a consecrated woman, from the early days of the Church, had to say to the Parisians of today. Except that I had not taken into account the capacity of this Saint to influence and inspire today as she did in the 5th century.

I am her heir

Geneviève is first of all “my” saint in the sense that she lived very close to the community of the rue d’Arras. Born in Nanterre, she came to live after the death of her parents with her aunt in Lutèce, on the Ile de la Cité. The rue de la Montagne Sainte Geneviève, the Library of Saint Geneviève, the Henri IV grammar school, the Panthéon, all these neighbourhood landmarks evoke her memory. 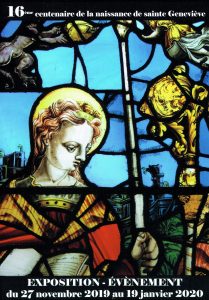 I have already taken part in one of the guided tours proposed for this year. At the end, I found myself saying, “What a privilege to live with this intellectual and cultural heritage! I am her direct heir. I owe it to her to get to know this woman better.” Come the spring you will find me on the road again, pilgrim’s booklet in hand, on other paths of discovery so that I too can :

“Contribute to radiating her memory, so that the flame of her courage may live on.”

A Saint for everyone

If Geneviève is “mine”, I’m not the only one to say so. She is a Saint for everyone. Lutèce in Geneviève’s time was already polyglot and pluricultural, as Paris is today. At the celebration of Vespers at St Etienne-du-Mont to launch the Year of Saint Genevieve 2020, there were so many people from all classes and walks of life, they had to close the doors of the church to latecomers. 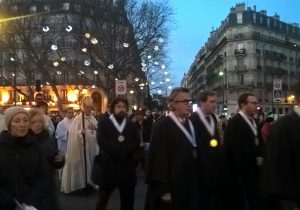 At the end, Archbishop, clergy and laity descended the hill in a joyful procession, reliquary and banners proudly held aloft before the curious onlookers.

As a participant, I enjoyed that evening’s procession with a crowd that, for once, was not shouting its 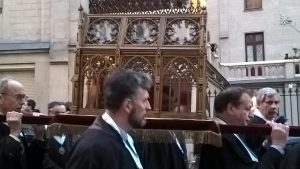 displeasure, but singing to celebrate. I became aware that I am one of the “Saints who live today in the Presence of God and who are given as Witnesses of the Gospel.” I felt the call to “help my contemporaries to discover the secret that animated Saint Geneviève – her Faith in Christ – her Love of others.”

On the bridge over the Seine we gathered in front of the tall statue of the Saint. As we entrusted all our prayer intentions to Geneviève, I understood why she has never officially been proclaimed a Saint. The vox populi simply elected her as their protector by acclamation. She continues to watch over us today. 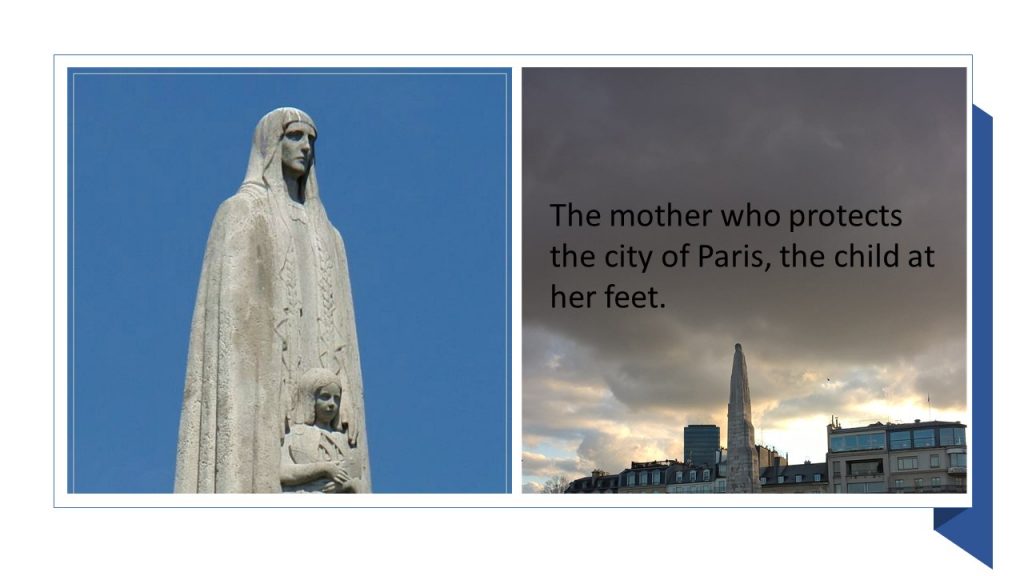 A Saint of prayer and action

History relates that Geneviève had already responded at the age of ten to St. Germain’s proposal that she consecrate herself to God. In her twenties, she was admitted to the order of consecrated virgins and received the long white veil. From then on, she led a life of prayer while retaining the functions of a municipal magistrate that she had inherited from her father as his only child.

The stories surrounding this “double life” are numerous. We know that she went to pray at night at the tomb of the first Bishop of Paris, St Denis. Legend has it that as the wind extinguished her candle, so her faith rekindled it.

At the same time, history tells us about an active woman, with authority and the qualities of a leader. She had to exercise important political responsibilities, sometimes in the face of mistrust and even hostility. Her action was the fruit of her prayer. At a time of change, when the Roman Empire was beginning to dissolve in the west, she was the one who knew how to use her fortitude and intelligence in order to convince the inhabitants to stay and defend Lutèce against the threat from Attila.

For me, this Mary and Martha is a model for the consecrated women of today. She invites me to : 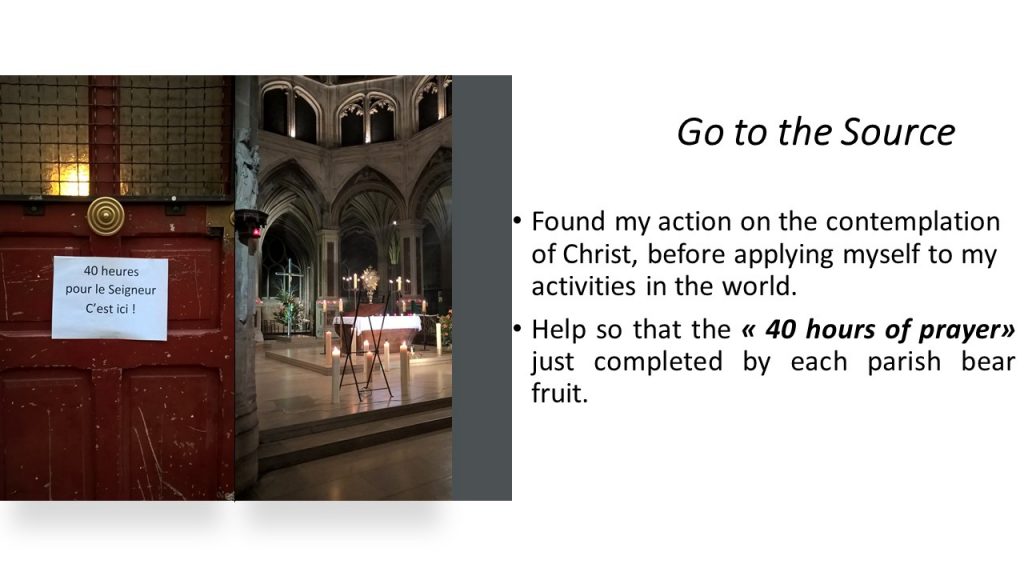 A woman who put her intelligence to good use 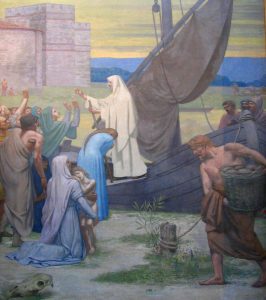 Geneviève came from a family of well-off landowners and could have led a comfortable life in the face of adversity. Nevertheless, whenever the city found itself in difficulty, she tried to find concrete solutions, to help the poor and the sick. One of the most often recounted stories is that of the “provisioning of Paris”. When famine set in in the winter of 479, she chartered eleven boats at her own expense to mount the Seine in order to buy all the available wheat.

The settlement of Lutèce has evolved enormously since the time of Geneviève. The contemporary issues of a big capital city are not necessarily the same. What has not changed is the need to pray, to watch over, to not let ourselves be overwhelmed by adversity. The city still needs inventive and engaged religious who are ready to act in order to find a common good for all the inhabitants. In all of this we, the Daughters of Jesus living in Paris, have our model of faith and action in St Geneviève. 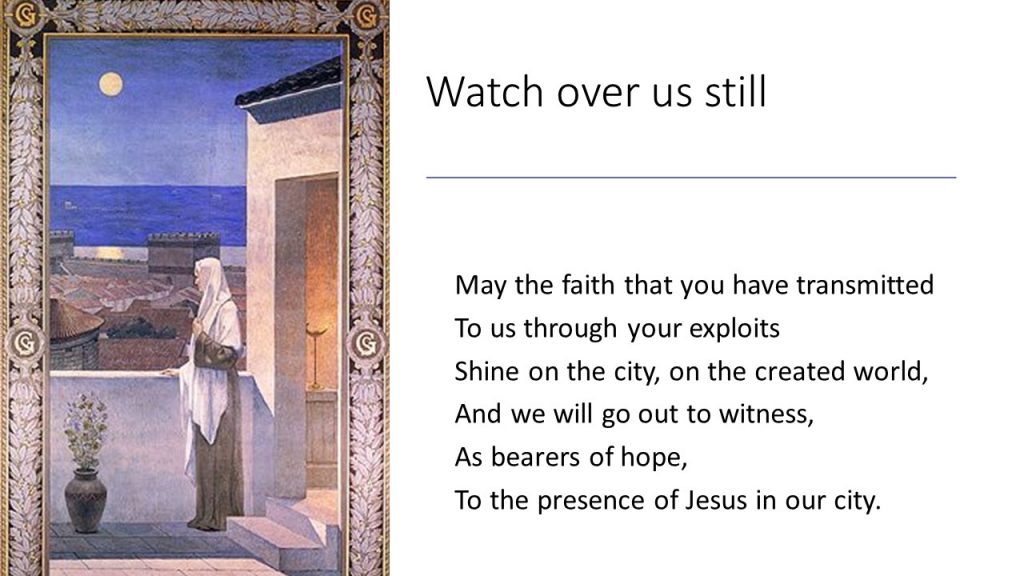