Christmas in Provence
Daughters of Jesus

During the Christmas season, 2020, Sr Josée Morice, who accompanies the Sisters of the Sainte Famille at our Motherhouse, Kermaria, created a creche in the style of a Provençal nativity scene. Sister Agnès Miquel went to interview her.

Agnès – Why did you want to create this creche?

Josée – I was very much affected by the floods that damaged the valleys and villages of the region of Nice, in October 2020, and I wanted to bring Jesus to life in this place of destitution, called to be reborn. I was inspired by the tradition of the Pastorale des santons de Provence“, a theatrical “tale” featuring the Provencal Santouns or Little Saints. This tale is spoken and sung at Christmas and situates the birth of Jesus in a village in the countryside behind Nice. 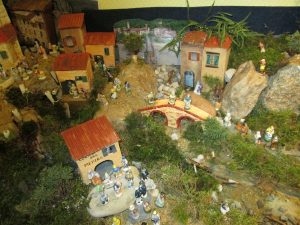 As I prepared the Christmas celebrations as part of my work as an animator, I imagined this tale. In addition to the biblical characters, there are also local characters from the daily life of the region. The text of the “Pastorale” is not fixed, and it has evolved over time and according to the events of the moment.

A tale is born.

Agnès – How did you come up with the idea of composing this tale?

Josée – The creation of this creche required a lot of energy, patience, and interiority. Once it was finished, I felt a sense of accomplishment.

The idea of writing this story then came quite naturally to me, to try and put into words what was beyond me. I wanted to give a message of hope to all those who are waiting: “Every sign of progress is like a ray of hope and light”, as the mayor of one of the villages said.

Yes, there where they are in pain!

In the tale the “Ravi” is the “One who marvels” who waits, welcomes and helps the people to discover.

On the square in front of the town hall of Roquebillère, Santons from all over France, were looking for information: “We were hoping to visit a creche in the valley. Where can we find it?” 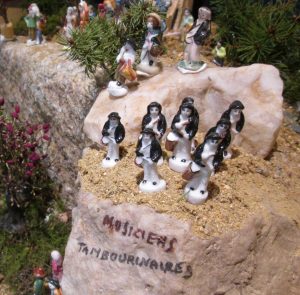 On the steps of the building, two Provençal locals told them:

“Go down there to the right and cross the river by the bridge. Then, walk along the rock of the drummers. The “RAVI” is waiting for you near the feeding trough for the animals, where the flood has receded.”

In the distance on the heights, in front of the small chapel, the parish priest said to the faithful at the end of the Christmas Mass:

“Go down to the bottom of the village and walk the length of the sheepfold. The RAVI” is waiting to welcome you near the feeding trough for the animals, where the flood has receded. He has good news for the whole region to announce! »

And so, a whole population of Santons flocked in from the hinterland and from the valleys of Vesubia, Tinée and Roya, looking for a feeding trough. Drummers lead the way with traditional tunes. They came from everywhere!

The “RAVI” with his arms raised to the sky, invited them to get as close as possible and announced:

“The amazing discovery of the Living Creche! A marvel!

Mary and Joseph and the “Little One” warmed by the breath of the animals! 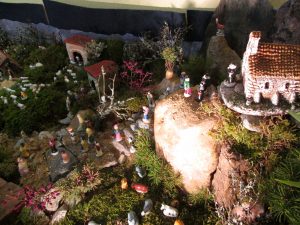 The ” Nouvelet “, the new-born king is passing through, and has elected to take up residence on the site of the surging waters of autumn.”

Then everything became a miracle, where the flood had receded! The Santons became living beings, energised, united, to rebuild together a habitable and fraternal valley in this marvellous High Country of Nice!