August the 14th, 2021, was a feast day at Kermaria, the Mother House of the Daughters of Jesus, in France. We were celebrating the centenary of the crowning of the statue of St Joseph which still has a great place for all the Sisters and lay associates of the Congregation.

Because of the pandemic, we had to celebrate the centenary in the privacy of the Mother House, but this did not prevent us from passing a beautiful day of remembrance and thanksgiving.

At the oratory of St Joseph the Poor 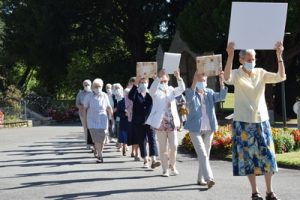 The celebration began with the gathering of a group of Sisters in front of the oratory of St Joseph the Poor. The 14th of August 1921 was mentioned when Mgr Gouraud, Bishop of Vannes, proceeded to the crowning of the statue of St Joseph before a crowd of 15,000 pilgrims and devotees of St Joseph.

The group then went in procession to join the Sisters already present in the chapel, climbing the steps of the “great door” which had been opened for the occasion. What song did we sing? Obviously the 1960 cantata: “On the great heath … House of Saint Joseph, thank the God of love, House of Saint Joseph, grow in love.” 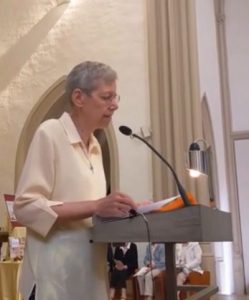 Sr Anne Thirion, our Provincial, addressed a word of welcome to the assembly, inviting us to be joyful and give thanks. She encouraged us to give St Joseph his rightful place and to continue to propagate his cult in our places of mission. 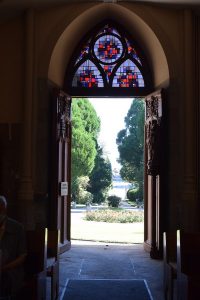 Passages from Bishop Gouraud’s pastoral letter of the 5th of April 1921 were then proclaimed:

“The crowning of a statue is a tribute which takes precedence over all the acts of devotion we practice towards the saints … The Church, by authorising the paying of homage to the statues of her saints, wishes to confirm and extend the cult we pay to them … The crowning constitutes the people of the region as the official guardian of this cult.

Should we look for the reason for the coronation in the singular protection of St. Joseph which the Congregation of the Daughters of Jesus has always enjoyed? Perhaps. Certainly, the Sovereign Pontiff wanted to reward the zeal of these modest nuns who have made themselves, without knowing it, the continuators of a somewhat neglected cult, even if it had been inaugurated in our diocese in the 17th century. It was given to the Daughters of Jesus alone to resurrect Him in our midst by becoming apostles in Brittany and even in the New World. The act of the Supreme Pontiff is the reward for their zeal.”

After which the traditional song, “O Patron Saint of Kermaria” resounded.

Joseph as a spiritual path 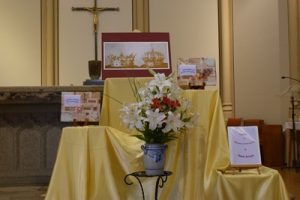 Interspersed with musical interludes, extracts from Pope Francis’ encyclical “Patris Corde“, written to launch the year dedicated to St Joseph, invited us to meditate on some aspects of Joseph’s spiritual journey.

Joseph saw Jesus grow day by day. Just as the Lord had done with Israel, “He taught him to walk, holding him by the hand. He was like a father to him, lifting up the infant against his cheek, bending down to feed him” (cf. Hosea 11:3). In Joseph, Jesus saw the tenderness of God.

The spiritual life that Joseph shows us is not a path that explains, but a path that welcomes. To help us interiorize these words, we sang “With a father’s heart“, a song composed for this year of Saint Joseph. 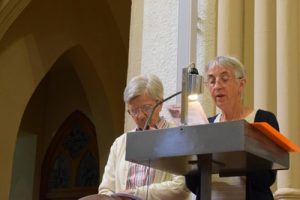 After this long moment of meditation and interiorisation, the time came to pray for:

How else could we end this celebration than with the singing of the Te Deum? The vaults of the chapel resounded as our albeit tired voices gave full reign, as in the days when we were young. 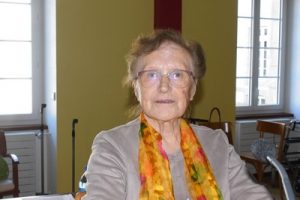 In the afternoon, the Sisters in the service of the Archives shared their research into the cult of Saint Joseph in the Church and in the Congregation. This very thorough research made us want to know more about it. Retraced some of the main lines, the archivists went from Pope Sixtus IV who asked in 1481 that the cult of St Joseph be extended to the whole Church, to Pope John XXIII who placed the Second Vatican Council under the protection of St Joseph in 1962.

From the very beginning of the Congregation, our Mothers have spontaneously gone to St Joseph with abandon and trust. Mother Marie de St Charles, Superior General from 1846 to 1884, entrusted the Congregation to St Joseph every year. She called the community of Bignan “House of St Joseph of Bignan” and attributed the acquisition of Lann Vraz, which was to become the Mother House of Kermaria, to Saint Joseph. 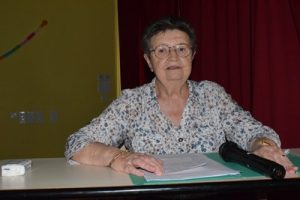 St Joseph has been venerated throughout our history and prayed to by every Daughter of Jesus. This tradition continues today and each of us is always keen to encourage Christians to place themselves along with us under the patronage of St Joseph. 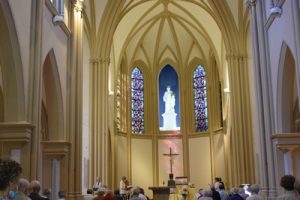 On the evening of the 14th of August 1921, the General Council of the time addressed the following to Bishop Gouraud :

“The memory of the coronation of St. Joseph will be engraved forever in the depths of our souls and we have the duty to transmit it to all the generations that will follow us in the Institute. We will maintain the cult of St Joseph. We will tell our young Sisters of the future the great things experienced on this day. May the protection of St. Joseph be extended to all our places of mission. May all the Daughters of Jesus, especially the youngest, allow themselves to be guided by the One who knew how to “honour the Sacred Humanity of the Son of God“.”

Today’s celebration in 2021 has not only allowed us to relive the event of the 14th of August 1921, it has also rekindled the desire to be faithful to the call of our former Superiors.

May Kermaria remain a place where many

come to pray to St Joseph to thank him,

and to confide their difficulties and distress to him.