An intercultural exchange
Daughters of Jesus

In the parish of Bignan, France, the Mass is animated once a month by a group of people orginating from the Wallis and Fortuna islands. Sr Agnès Miquel went to meet them.

This year will see the celebration of the 60th anniversary of the statutes that link France and the French overseas Territory of the Wallis and Futuna islands in Oceania.

Before Mass began, I was able to interview Madame Amallya, who comes from these islands, and who is a member of the « Pelapela » choir.

Agnès : There is a small community of people from Wallis and Futuna in Bignan? 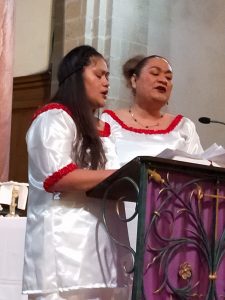 Amallya : It’s one of several communities in each of which we have a small choir. At home, each village has its own choir.

Agnès : How did this community from Wallis and Futuna come about in Bignan?

Amallya : People showed the way. There are some who have found work here: in the army, in associations, in the factories.

Agnès : Is the community Catholic?

Amallya : Yes, they are very Catholic, above all culturally and then religiously. In the 1961 statutes, France took over Wallis and Futuna as a protectorate, but with the condition that its religion and customs were to be respected. The Catholic religion is very important to us. 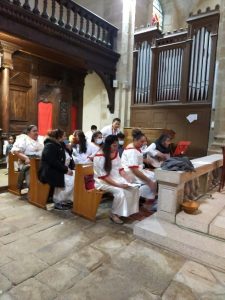 Agnès : Listening to you, I have the impression that singing is very important to you?

Amallya – Yes! When we sing, we give ourselves to God, we entrust all our worries to HIm. And during this time of pandemic, praying together is important.

In our village, on May 1st, we celebrate Saint Joseph who is the patron saint of the village.

Agnès : You lead the mass at Bignan once a month? 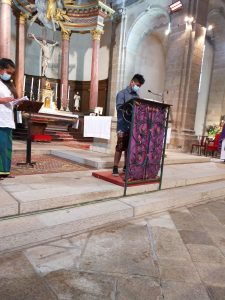 Amallya : It’s our way of thanking and praising the Lord for all the wonders He grants us every day. With prayer, we can overcome trials more easily.

It is also a way of integrating into the parish community. As a minority, it’s our way of saying that we are there and that we are French.

Click below to watch the video of the Word procession

I was also able to interview the community of the Daughters of Jesus of Bignan.

Agnès : When the Wallis and Futuna community animates the parish mass, what « plus » does it bring to it ??

Marie-Thérèse Hays : It’s important for them to find their place in the Church community in Bignan. And, for us, it’s lively.

Marie-Thérèse le Goff : For the smallish Christian community of Bignan, it’s an opening, a window onto another culture, other people, other places in the world.

Marie-Anne : When I hear their songs, I am transported to Polynesia. I hear songs that are very different from our’s and it’s important that this difference comes to us in terms of singing and culture. There is no uniformity, but there is plurality. It also makes me happy to see all these young people in church.

Brigitte : At parish level it’s an opening up.

Reine : These are people you meet in the street and it’s important to meet them in the Christian community as well.

Marie Thérèse Cadoret : This Mass is also important for the parish that welcomes them. It’s an opening.