A delicacy that filled our hearts with joy
Daughters of Jesus

In Bignan, a charming little village in Brittany, France, children and a cat have created a link between the community of Daughters of Jesus and their neighbours. 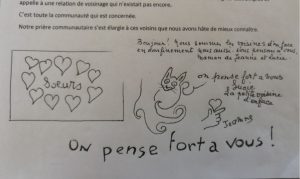 We are a community of eight sisters, between 70 and 91 years old. We live in Bignan, a small country town in Brittany, very dear to the Daughters of Jesus, because it is the place where the Congregation was founded.

On Sunday morning, April 5, we discovered a very special letter in our letterbox. In an envelope illustrated with little hearts, a page of children’s drawings showed a little cat. It was signed ‘Jeanne and Lucie’, and on another page we read: “We are thinking about you a lot”.

The drawing of the little cat reminded us of the family who live in a first-floor apartment just across the street from us. In fact, we had noticed a young cat on the windowsill, sunning himself throughout the day. From time to time we would call out to him, but we didn’t know his owners who had just arrived.

This letter surprised us and touched us by the delicacy shown towards us. As discreetly as possible, taking into account the confinement, we went to say’ thank you’ with a bunch of tulips. It was an opportunity to meet the young mother whom we had not yet seen. 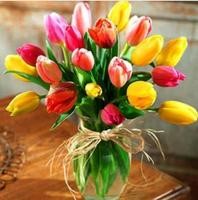 Since that day, we have held conversations from window to window, across the street. A few days ago, the mother, Jeanne and Lucie came to bring us a box of chocolates! Our response will be a bouquet of roses and an invitation to tea as soon as we can.

Why has this fact marked us? 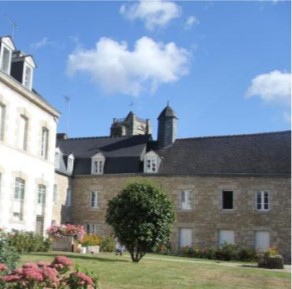 Receiving that letter in such a discreet way prompted us to pay attention to very simple signs and calls for a relationship with our neighbours that did not exist before. Our community prayer has been extended to these neighbours whom we are eager to get to know better.

The community of the Daughters of Jesus, Bignan, France