A celebration of thanksgiving
Our life | Daughters of Jesus

The Sisters in community at Westgate-on-Sea in England recently attended a celebration that marked the end for them of a long collaboration and friendship with the Ursulines. Find out more about this shared history.

Early July 2021 saw a weekend of “Finals” in England – the Tennis Championships at Wimbledon and the European Football Championship at Wembley. Prior to that, however, the Daughters of Jesus of the English Province took part in a “Final” of a rather different kind, marking the departure of the Ursuline Sisters from Westgate-on-Sea after 117 years of presence.

Two of a kind

Like the Daughters of Jesus, the Ursuline Sisters arrived in Westgate in 1904 from Boulogne-sur-Mer seeking to escape the anti-clerical laws then in force in France. They arrived with 45 pupils and set up a small school which they ran until their return to France in 1926.

The school continued, however, as Ursulines from Avallon, France, who been living in Southwest England wished to buy the property. As there were English and Irish Sisters in the community, what had been a French convent school now adopted a more native identity. Numbers increased and the school grew. Today Ursuline College continues to flourish under the guidance of lay staff. 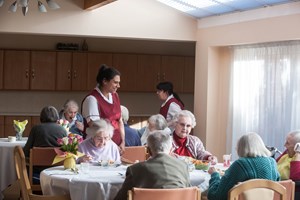 As time passed it became evident that specialized care was needed for the sick and elderly Sisters, so an infirmary was created in 1985. Soon after, the Daughters of Jesus were able to enjoy the nursing care offered at Lourdes Care Home.

“A celebration of collaboration” 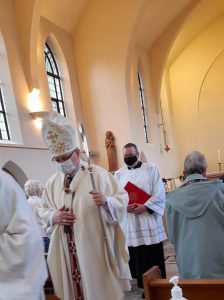 Like all Religious Orders discerning their future, the Ursulines have now decided to bring their communities closer together in the London area. Hence the marking of their departure. The highlight on Friday the 9th of July was a Mass of Thanksgiving celebrated by the Archbishop of Southwark, John Wilson, assisted by the priests, who had served the community in recent years. Religious Sisters from the area were also present, especially our own Sisters, who had been residents in the Care Home.

With a joyful spirit 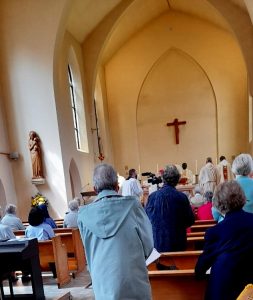 It had been hoped that many friends of the Ursuline Convent would also be able to attend but alas, numbers had to be reduced. The liturgical celebration involving the school had to be curtailed and no live singing was allowed. However, no Covid restrictions could mar the joyful spirit of the day.

The beautiful Mass had been prepared by Sisters who had spent many years at Westgate with a booklet, beautifully put together by Sr Theresa Canty, known to many of us. The booklet was also a souvenir of the convent with a short history and some lovely photos of Lourdes, and the garden.

Mgr Wilson preached a thoughtful and much-appreciated homily. Prayers were offered too for the Daughters of Jesus in gratitude for their friendship over the past years. Sisters Bernadette and Maureen, who had recently died after their transfer to St Michael’s Care Home, were given a particular mention.

Lunch followed, with everyone sitting in community groups or “bubbles”. A lot of work had gone on behind the scenes, and the cook and her team excelled themselves in producing a superb dinner for a large number. Congratulations are due to everyone for making the day so lovely. 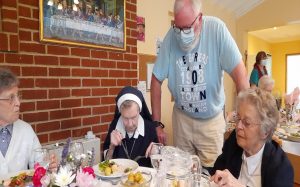 As they leave Westgate, with all its rich history and beauty of a small seaside town, the Sisters pray that the spirit of their founder, Saint Angela Merici, will continue to live on in the hearts of former students, staff, and friends. 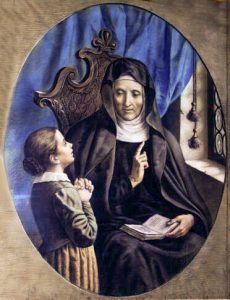 May they continue to be inspired

by her love of God, her spirit of prayer

and her kindness and hospitality of heart.

for the Sisters in community at