Worldwide March of Women 2021
Daughters of Jesus | Our life

In 1995, an impressive march was held in Quebec: “Bread and Roses”, which initiated the World March of Women of the year 2000. Normally, the march takes place every five years, but because of the pandemic, we had to wait until 2021 to continue it. Sisters Georgette Ploudre and Ursule Beaulieu tell us about this year’s event in Rimouski, Canada. 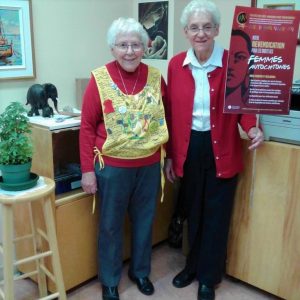 This year the march was organised on Native territory in Cacouna, in the Rimouski region, where approximately 200 people gathered together.

The theme of our meeting was

IN ORDER TO LIVE,

SO AS TO TRANSFORM

We walked all the way to the site. Then, there was a demonstration demanding respect for the rights of indigenous women, equal justice for all men and women, and the implementation of concrete measures to provide security in the lives and daily needs of indigenous women. 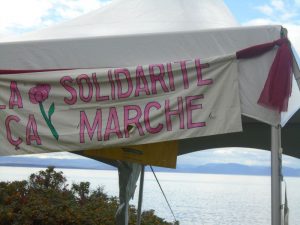 Short talks by the Mayoress of the place, by native women of all ages and other women involved in the community, guided our reflection and revealed to us the urgency of claiming these rights; our governments need to act, and to act quickly. The ecological and environmental aspects were strongly emphasized. Slogans demanded freedom and the recognition of rights. 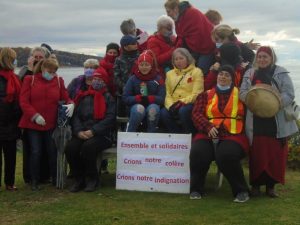 Indigenous dances performed around the fire, accompanied by songs to the sound of the drum, led us into silence, reflection and prayer. We were invited to participate in a symbolic gesture: take a pinch of tobacco and walk around the fire to place this offering while praying for the indigenous women and girls who have disappeared, were raped or killed, in recent years. A little red dress to pin on our clothing reminded us of this sad reality.

We then visited the site, this tip of land at the edge of the river, which belongs to the Amalekite people. It is a very beautiful spot! A monument, a totem pole and texts written on posters informed us about the site. It is indeed a sacred land, a land to be respected!

While going to the peripheries along with others,

we commit ourselves to build the world of tomorrow

invite us to do.