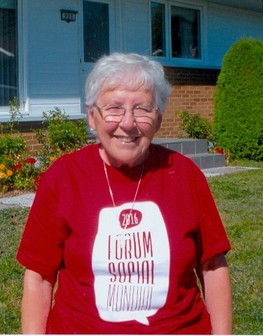 The World Social Forum is a space for dialogue on various global issues. I had the privilege of participating in this Forum, the 12th since Porto Allegre in 2001, the 1st to take place in the “Countries of the North”.

Thirty-five thousand people coming from 125 countries participated in it to reflect on how to bring about social transformation by setting up certain actions.

The theme of this encounter was

“Another world is necessary, together it becomes possible.”

An opening march through the city awakened a festive atmosphere.

One thousand two hundred workshops were offered. How can I choose 6 from among so many. I was fulfilled by my choices which I briefly describe:

Contributers from the United States, France and Quebec showed us that we have power if we work together; that the steps taken by popular groups united with persons of the middle class led to the creation of new rights for the poor; that acting in solidarity and commitment succeeded in creating policies to defend the rights of the poorest so that they can live in dignity. 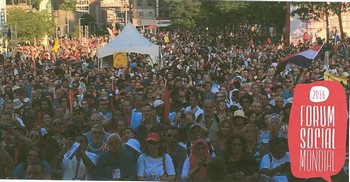 A team of persons committed to community projects with impoverished people told us about their way of being with these people in sharing their preoccupations, in listening to their needs and in giving an active role to these citizens.

We are invited to:

Five young women talked to us about their life, about their way of thinking in a circular fashion, about creating circles by gathering together; the only circle to break is the circle of fear, of violence. To make relationships more human transform the present by being aware of the past while foreseeing tomorrows’ society.

Italian Sister Gabriela Bottini, living in Brazil with victims of trafficking presents a grim picture concerning what these persons are living: disorientation, giving up of their papers, sale of organs for transplantation, slavery, raped to produce a baby that is sold at birth, others have disappeared or killed. Sometimes families benefit from this trafficking.

Young people of Quebec, spoke to us about their experience in Senegal, Haiti, Equador, Bolivia and in Angola. In living various projects with the people: village, farming, collective kitchens, community gardens, decontamination of water and ecology, they noticed growth in solidarity, openness, sharing of the word and in speaking. Everywhere they celebrated Mother Earth. 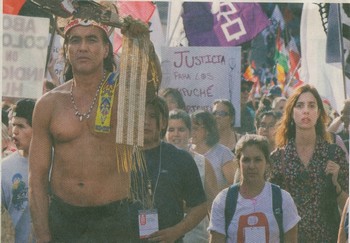 Using miming, words, dances, songs and music they presented the voice of resistance and the alternatives.

Choirs and speakers stressed the art of acting together to protect our environment and to improve it.

The resilience of the Amerindians is a sign of hope. Let us recognise their tightly woven relationship with the Earth. Let us contemplate the other visions of God for the world. Since Porto Allegre, let us gather together the intuition of those who want to change the world through solidarity. The liberation theology of the latino American people invite us to be close to God and close to the poor. The Church is making its way with the Spirit of Christ and the poor. Let us listen to the cry of the poor, the cry of God. Let us work with persons living in poverty. Let us transform our vision to reduce poverty and to fight against social inequality . Let us radiate justice and peace!

An Amerindian led a meaningful prayer to celebrate our Mother Earth and to share our hope together.