The annual retreat of the Catholic Women’s League was held at Villa Madonna Center in St John, New Brunswick, from October 21-23. The theme for this year, “Safeguarding our Common Home”, created a lot of interest. 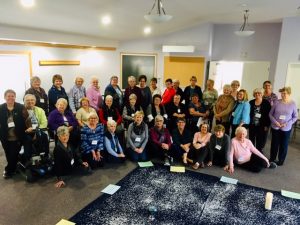 Sr. Denise led the group. Her knowledge and passion for the theme were very obvious. With well-chosen slides and music, she captured everyone’s attention. By re-visiting our history from the very beginning, she demonstrated the interconnection between science and the spiritual realm. She helped us to better grasp the meaning of Pope Francis’ words when he tells us that we are facing an environmental crisis, an economic crisis as well as a human identity crisis.

Guardians of the environment

We are all called upon to become guardians of the environment, protectors of our Earth – this earth entrusted to us by God, who made it so rich and beautiful. Given this knowledge, it is impossible to separate humanity from the environment. It is also impossible to love God and to neglect what he has created… the two cannot be separated.

Members of the Catholic Women’s League of Canada