The Sisters of Tonneins (France)
Daughters of Jesus 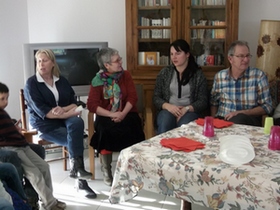 d to sing that when we were children …

Today we would rather sing, “when they are shared with the neighbours”.

And yes, they were good the pancakes in January … our neighbours came; and you can be sure they were waiting for the invitation!!

We enlarged the space of our tent as much as we could and prepared the big table that Diana decorated with a magnificent bouquet of flowers. When we first arrived Diana was our nearest neighbour but as the family had grown with the arrival of a grand-daughter, she had to move to a larger house in a nearby housing estate. 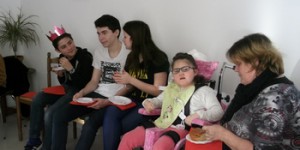 off happily, with everyone getting on well together. Including the four sisters, we were 28 all together, and that is not counting those who had excused themselves. We had radiant sunshine so that the children could play outside for a while.

These meetings which always begin with conservations about “everything and nothing” have helped us to get to know each other in more depth: you can make out the need 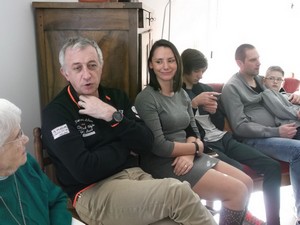 s and the desires. From the beginning friendships have formed … when we meet each other we talk …. we have discovered handymen who have proposed their services.

We are no monger strangers to each other … and we have already fixed a date for our next meeting in June for the “fête de voisins” (annual party between neighbours) ….

“Go out to the peripheries” as Pope Francis asks us to.