The big picnic for hope

The Daughters of Jesus of the English Province show us their indomitable spirit. The Coronavirus may have upset the nation’s plans to commemorate the Victory in Europe in 1945 but the celebrations turned out to even more significant than originally planned.

Were it not for the COVID-19 lockdown, many of us would have been commemorating the 75th Anniversary of Victory in Europe Day, on Friday 8 May, with street parties and other celebrations. This day in 1945 when Britain and its allies accepted the unconditional surrender of Nazi Germany, should have been the occasion for cathedral celebrations, street parties, and giant picnics all over the country. Alas, the “enemy” struck again, not the Germans this time but the Coronavirus. 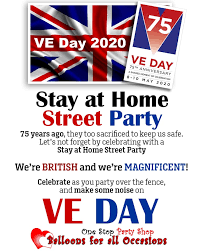 The British however, showed their indomitable spirit. With war memories intact among the oldies, we were up to the challenge. We were not going to be deprived of an occasion to celebrate. Hence the “street party” became the “stay at home” party – a picnic in the back garden and toast the neighbours over the fence! Yes, we were going to honour the heroes of yesterday, of World War II but now we could also honour the heroes of today. People wanted to pay tribute to those risking their lives on the ‘front line’ of today – National Health Service staff, carers, delivery personnel, workers in food stores or public transport, all those who have worked to keep life going on.

The remarkable collective effort of the nation during World War II has found its echo in the present day collective effort to “stay at home” and play our part in combatting the pandemic. It has found an echo too, in the desire to remember those in need. The picnic evolved into a fundraising effort to help those in the UK who are struggling at the present time of crisis to put food on the table.

Our Sisters were well up for all of this, they were going to join in the celebrations.  Despite the recent Brexit, the Sisters in the Hengist House community in Westgate showed that Great Britain and France can still be allies in combat: 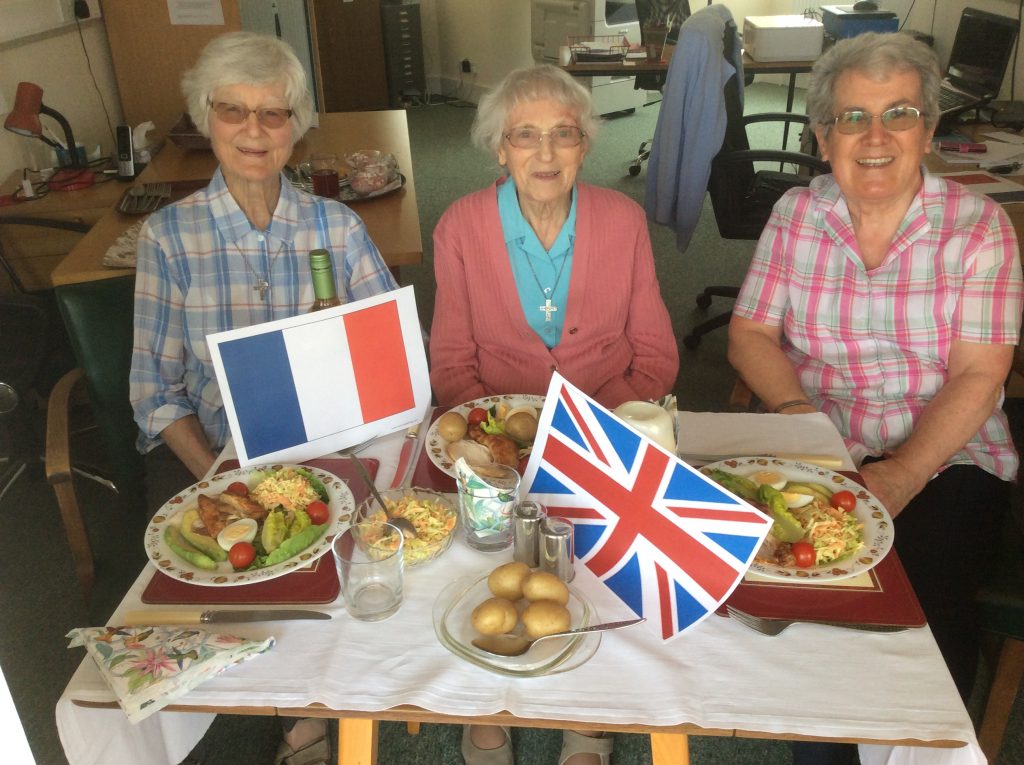 Their neighbouring Sisters in the Lourdes care home spent the day in great style: 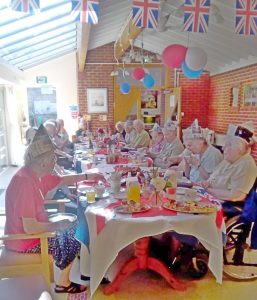 “Staff went to town to make it a special day for us all.  We observed the 2-minute silence before Mass, had bunting, photos and Union Jacks everywhere, red, white and blue tablecloths and serviettes, wine etc.  While we watched the afternoon BBC1 programme, they transformed the dining room into a street party for tea merging into buffet supper.  Caroline played the wartime songs and tunes on the keyboard and we all joined in singing and playing percussion instruments while some danced around our long table.  It was all great fun, and all the Sisters were able to be there for part of the day at least.  After a gap, the Community Room filled again for the evening programme and the Queen.”

In Peterborough, towards the north of the country, the Sisters in the Maples were more modest but deserve a prize for ingenuity and showing how to make the best of things in difficult times. Each resident was asked to come to the door of their studio, mug in hand to be served tea and cake!

For the Sisters who are now in their eighties, the day brought back memories of 1945, often focused on the feeling of sheer relief that it was finally over, at least in Europe. Interviewed for the site: 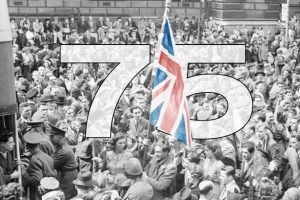 “I lived in Welling with my family – we were 5 children then we were evacuated to the country, living in a village in Isington, Hants, in a large country house. School was in Alton and we were given a day off before the actual day of signing the papers.

In the evening of VE Day, Villagers came together for an enormous bonfire in a farmer’s field. We all danced and sang around the fire, revelling in the fact that we were free and could have lights after all the years of blackout.

I looked forward to:

For Helen, it’s the Victory Parade that has stayed in her mind:

“I was 12 years old when Victory was declared in Europe. My Dad was fighting in Africa so I expected him home the next day but that wasn’t to be. There was a street party but as food rationing was still on there was not much party food. 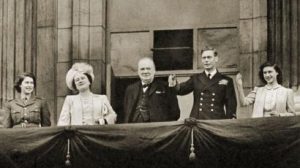 Later in the week, there was a Victory Pageant on Croxley Green, each road had a float. My road, Gonville Avenue did not win a prize but was highly commended. I went with my family up to London for the Victory Parade and saw many famous world leaders that had participated in winning the war. Then we went on to Buckingham Palace right up against the railings and shouted until the King and Queen came out with the two Princesses, one of whom who is our Queen now. The crowds were so huge we had to wait hours to get on a train back to Croxley but nobody minded.”

While Sheelah makes us think of today’s enforced separations:

“Like Monica- I think – we had no street parties where we lived.  All I remember is going to the cinema to watch the celebrations on screen.  We did not have a TV.  There was only my mother and me at home. Bill was with the Army in Greece, Paddy was in a submarine somewhere, Mary had not yet been discharged from the Women’s Auxiliary Air Force.  Dad was somewhere in the War Office. This is why Mum and I went to the Cinema.  I have very hazy recollections.” 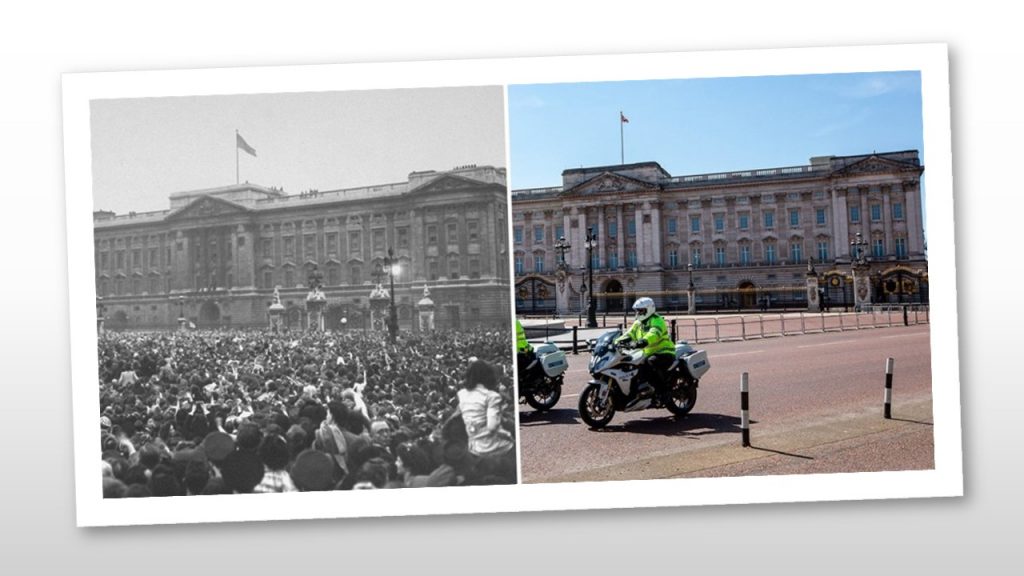 Never give up, never despair

Many of the Sisters ended the day by watching the Queen’s poignant VE Day address on television. She shared her vivid memories of VE Day 1945 when she was still a 19-year-old princess in army uniform. Speaking at the same hour as her father did 75 years before, she said that the current pandemic is not over but like World War II:

“At the start, the outlook seemed bleak, the end distant, the outcome uncertain … but we kept faith that the cause was right and this belief, as my father noted in his broadcast, carried us through.”

For VE Day 2020, in the middle of the pandemic where the outcome is still uncertain and the end still feels distant, she gave us this message of unity and hope, which we would like to share with you all: 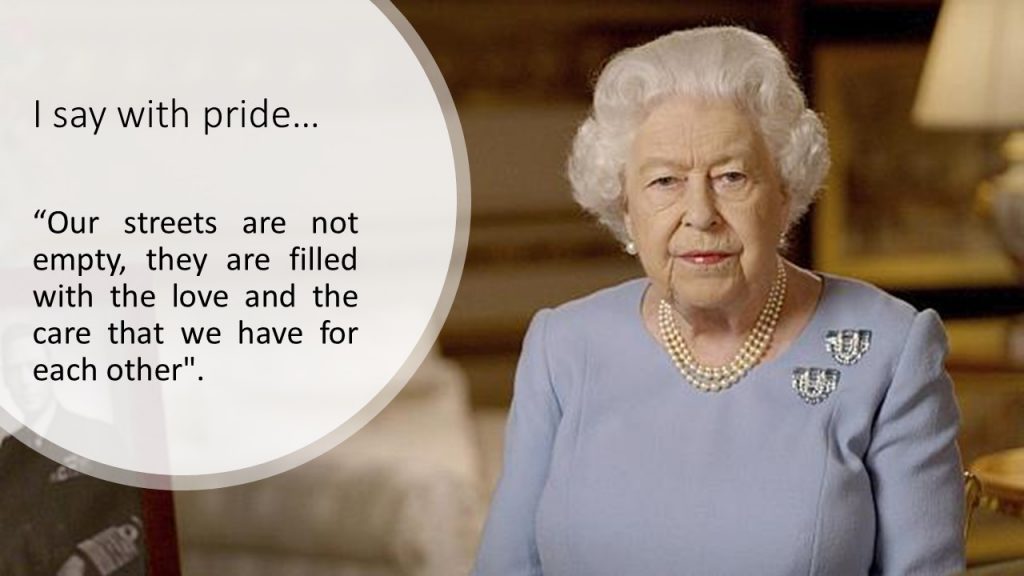 and the Sisters of the English Province