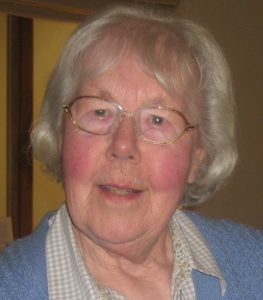 Sr Monica Wyard (Sr Marie Bernadetta) passed away in Peterborough, England, on the 11th of December 2021 at the age of 90. Born the 26th of May 1931, Sr Monica made her first profession on the 4th of August 1950. Her funeral Mass will take place on Tuesday the 18th of January 2022 at the church of Saint Peter and All Souls, Peterborough.

Monica was born on the 26th of May 1931, the eldest of six children. She inherited a creative talent that was to influence everything she undertook in later life.

As were her sisters, Monica was educated at St. Joseph’s Convent Grammar School in Abbey Wood, south-east London. Much later, she was to become a member of that Breton Congregation, to whom St. Joseph’s belonged, the Daughters of Jesus. On completion of her studies, then, in 1948, she duly travelled to war-torn France and the Noviciate. Temporary Profession two years later saw her back in England to begin her teacher training studies in earnest.

From then on, Monica’s mission as a Daughter of Jesus seemed to take flight, beginning with her years teaching Domestic Science/Home Economics at St. Josephs to many more years teaching adult catechetics throughout the Diocese of East Anglia. She organised courses, including RCIA (The Rite of Christian Initiation of Adults), conducted Bible Study Groups, and gave talks, most of which took place in the evening, as well as preparing children for their First Communion and young adults for their Confirmation during the day. Catechetics and all that that entailed was always her first love.

Although strong-minded and forthright, Monica had a gentle side to her character. She was compassionate, especially for the poor, the destitute, those less fortunate. She was generous with her time and shared her many talents.

May you rest in peace, good and faithful Servant.