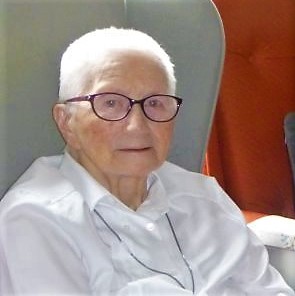 Sr Rose Fowler of the Province England, died during the night of 22nd – 23rd April 2019 at the Lourdes Community Nursing and Residential Care Home, Westgate on Sea, England. Her funeral will take place on Thursday 9th May at Westgate on Sea.

In remembrance of Sr Rose :

We are all sad to bid farewell to our dear Sister and friend, Rose Fowler. Our lives have been blest and enriched by having known her – her kindness, her sense of humour, her generosity and her willingness to be of service. I first met her in Princes Risborough as she was going off to the novitiate in France. I, myself, was a young girl away from home for the first time. By the time we lived together again at Westgate on Sea we were both much older and Rose’s health was very fragile.

Rose was born 15 February 1929 in Corcoaghan, County Monahan, Ireland, and baptized the next day. She was the youngest of a family of five, Michael, Margaret, William and Frank, who have all predeceased her. Rose was the “baby” and admitted that she was spoiled by the family. Her father died young and her widowed mother had a struggle to raise the family. Rose was very devoted to and proud of her family at home in Ireland – her sister Maggie, the mother of Anne Marie, and her brothers, their children, her nephews and nieces.

She often spoke of their musical talents and Irish dancing and their ability in the Gaelic language. The walls of her room were adorned with their pictures and her prayers for them all, also for her dearest friends Sisters Eithne and Aloysius. We are so glad to have her family here with us today.

Rose was educated at the St Louis Convent School and at the time of her leaving expressed the desire to be a nun. Her headmistress proposed several options, she tried one other convent but then decided to come to England in 1946 to the Daughters of Jesus. There she was received at St Teresa’s Convent, Princes Risborough, to prepare to enter the novitiate in the Mother house in France. Her companions were Sisters Marion Staff and Peggy Brouder. They were the first young ladies to be received into the English “Juvenate” where they spent some time learning French and getting used to life in the convent.

Before travelling to the noviciate in France the young ladies were expected to have their hair cut short. Rose however, had just returned from a holiday at home in Ireland with a lovely perm and was very reluctant to have the expensive hair-do cut off so soon. Mother St Albert allowed her to keep the perm and admonished all three to be model postulants and to give a good example of her training in the English Juniorate.

Arrived at Kermaria, the Mother house, it was difficult for Rose to master the French language and one day she presented Marion with a sheet of paper with a list of her sins. “Can you translate this for me?” she asked! One year as a Postulant, followed by a year as Novice and on August 4th 1949 Rose became a professed religious sister, Mary Patrick Joseph (her father’s name). With her two newly professed companions Srs Anna Maria and Mary Ita, she returned to England, each one to her designated community.

With grace, joy and good humour Rose devoted herself to caring for the material needs of the Sisters for many years in Colne, High Wycombe and Rickmansworth, helping with household tasks and meals for the school children. In 1968 Rose was asked to join the foundation of the Rathmore community at Greenisland in Northern Ireland which would serve as a hostel for Catholic boys at the University of Ulster. With the community, and especially with Sister Ethna, she lived through years of “the troubles”, sharing the residents’ sufferings and helping in many ways to lift the spirits of both Catholic and Protestants alike.

After the closure of the Hostel in 1989 and of the Rathmore Convent, Rose was asked to take charge of the community and to share in the pastoral ministry in the parish of Greenisland. In this role Rose ministered Holy Communion to the sick and elderly in their homes and, in those troubled times, gave not only spiritual consolation but helped in practical ways,such as cutting lawns or driving people to hospital. She became an apostle of ecumenism.

As time went on the sisters in community were also ageing and sick. Rose attended to them with compassion, patience and good humour. She loved to garden and turned the garden of Ard Mhuire, overlooking the Belfast Lough, into an interesting oasis of peace and colour. The garden was a maze of small spaces where you could sit and rest to catch the sun or view Belfast Lough.

1989 marked a milestone with the celebration of 50 years religious life which she shared with Marion at the celebration Mass and feast with the 25th Anniversary of priesthood of Father Dan Magnier, parish priest of Mill End. Ten years on in 1999 she celebrated sixty years with us at Westgate.

Over the years Rose laid to rest her good friends of many years in community of Greenisland – Sisters Mary Patrick, Patricia, Mary Eithne, Aloysius and Marie Louise and maybe she expected to rest there with them too, after suffering a heart attack. However, it was not to be, and the time came to leave Greenisland. In 2011 the community closed its doors and Rose returned to her previous community of Colne in Lancashire where she had many friends. However, her own health was declining and in 2012 she was welcomed to the retirement community in Westgate on Sea. Rose gradually realised that she could no longer cope in community and in 2014 asked to be admitted to a Nursing Home. After three months in Eaton Lodge which was close enough to Exbury for Marion to take her Holy Communion each day and where she was greatly loved and appreciated, she transferred to the Ursuline Sisters Community, “Lourdes Nursing Home”.

I think “contentment” best describes Rose’s sojourn here in this lovely place of holiness and tranquillity. Here she made preparation for her final meeting with the good Lord to whom she gave her life. How she appreciated the care and enjoyed chatting and singing with the Sisters and carers. The blessing of Lourdes Nursing home for our Sisters with you, dear Sisters, is beyond price and with Rose I say, “Thank you so much and may God bless you all.”

Rest in peace Rose. Happy meeting with the Lord.