Remaining on mission till the end
Daughters of Jesus | Our life

At their recent Annual Assembly, the Daughters of Jesus of the English Province reflected on how best to continue living their mission “till the end” . They also took time to celebrate the jubilees of two of the Sisters.

Mid October saw the Annual Assembly of the English Province take place at the Royal Foundation of St Katherine, London, with a double objective of information and celebration. As Sr Teresa McMenamin, our Provincial, emphasised in her opening speech, it was an occasion in a context of uncertainty to both: 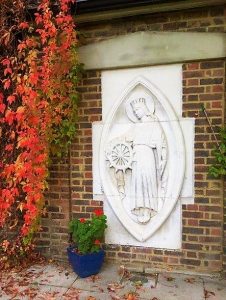 – look at our future

– reflect on how we can live our mission in the here and now.

How best to live till the end

We were helped in this by the main speaker for the Assembly, Sr Helen Costigane who spoke to us on “Living till the End” from a canon law point of view. Outlining possible ways of restructuring the Province, she asked us, “Where can you see yourselves in the future?” Another aspect, the cost of living to “living to the end”, was taken up by Mrs. Ella Holloway, Finance Officer for the Province, and Sr Mary Clare who informed the group about: 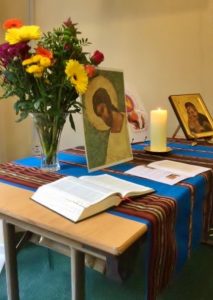 There are also legal questions to be thought about when preparing for the future. A few years ago, all the Sisters in the Province signed a Power of Attorney Health and Welfare Document. This nominates a person or persons who will make sure the Sisters’ health needs will be cared for when they, as individuals, might no longer be able to do so. The solicitor who put this in motion came to the Assembly to explain how we can revise our documents if there is a need to do so. 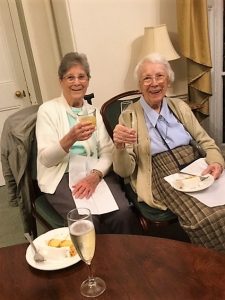 The Assembly also had its lighter, celebratory side, however. This year the Province celebrated platinum and diamond jubilees:

Not forgetting Sr Rose Fowler who died earlier in the year just three months short of her platinum jubilee and Sr Margaret Westwood, an English sister on mission in Chile, who had celebrated her diamond jubilee at Kermaria in June.

Pronouncing our vows in the name of the Trinity

The day ended with a Celebration Mass, presided over by Fr Jim Hurley, the Vicar for Religious of the Diocese of Southwark. Fr Jim is well known to many of the Sisters as he is a former Parish Priest in Westgate where we have two communities. In his homily, he spoke of “Pronouncing our Vows in the name of the Trinity”. As there are three persons in the Trinity so there are three vows in the life of a consecrated religious. Each vow can be aligned to one of the persons of the Trinity:

Following Jesus Christ calls for unbelievable faith, trust beyond imagining and placing our hands in the hand of God. After having renewed their vows, Sisters Marion and Hannah were presented with a baptismal candle to remind them of their initial commitment to follow Christ at baptism. 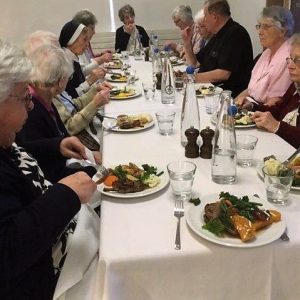 A celebratory meal followed on from the Mass, the highlight of which was a special cake made by Sr Monica Wyard. Even the posy of flowers, handcrafted in special icing was edible! It was a beautiful tribute to the two Jubilarians and provided the Assembly with a festive conclusion. 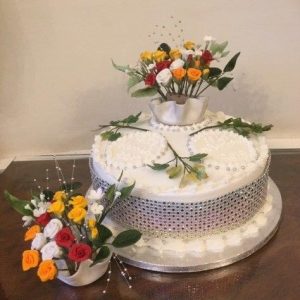