Noah’s ark according to Max

Sr Mary Clare, a Daughter of Jesus from England, relates how work with 9-year-old Max on his religious education topics during his “school at home”, led to an interesting comparison of Noah’s Ark, the flood and today’s pandemic.

The 21st Century Ark of Isolation

Noah got his orders from God but ours came from the World Health Organisation and our Government.  Noah was given orders to build an Ark of certain dimensions with a different shape according to each faith interpretation. To begin with, the Christians saw it as a truncated pyramid then later as a rectangular box with a sloping roof. The Jewish tradition saw it as a box or chest, while the Quran saw it as a thing of boards and nails.

During the pandemic, we were told to stay at home to save lives and the health service. We had to keep at a safe distance of two meters known as “social distancing”. Only key workers in the medical profession, or on front line services such as transport and delivery, could circulate more freely. Then there were those who were vulnerable and had to be “shielded”. This was almost identical to the three levels in the Ark where the animals were divided into various categories. As there was a rush into the Ark, Noah didn’t have time to sort the animals into clean or unclean. According to Jewish tradition, the clean animals made themselves known to Noah by kneeling before him as they entered.

How do you live in a confined area? 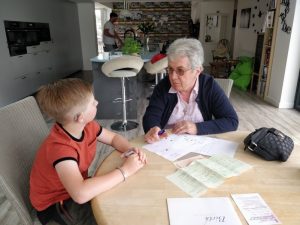 Max, my pupil, wondered what Noah and his family did all day. According to Judaism, they fed the animals day and night. Lockdown in the pandemic sense gave rise to all kinds of creativity. Social media came into their own with text messaging, phone, and video calls.   Families organised virtual quizzes, and there were virtual keep fit lessons and other activities to keep people mentally safe. “Streamed” Masses, and even exposition of the Blessed sacrament, helped us in our spiritual life. We had more time for prayer and reading.

People kept an eye on neighbours by picking up medication from the pharmacy or food shopping. As there was a shortage of personal protective equipment in the UK, some volunteered to make garments and face masks for hospital staff.

According to Christian teaching, the Ark floated to and fro in four directions, making the sign of the Cross. In Islam, the Ark would move when Noah said, “In the name of Allah move/stay”. Sometimes the directives from Government were as equally confusing, especially when it came to a gradual unlock. 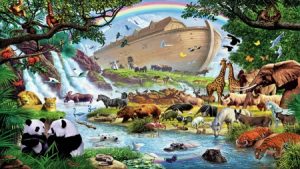 According to Islam, Allah commanded the Earth to absorb the water. Certain areas were slow to do so and so were punished by becoming salty, dry, and arid. The waters not absorbed after the flood still exist today as the seas. As the pandemic slowed the Government allowed “Bubbles” to be formed. Two or three from the same family were allowed to meet up to start with, then the “Bubbles” grew in size!

In the Jewish tradition, the number of animals that disembarked from the Ark was the same as those that had embarked. Alas, this cannot be said of the pandemic and now there is a study to discover why certain ethnic groups were more prevalent to catching the disease.

I end my story as I began. Max wanted to know why a dove was a symbol of Peace, so we looked at another aspect of Noah’s Ark in relation to the pandemic – it is a historical event affecting the whole world. Where did the Ark come to rest?  The three Abrahamic Religions still do not agree on this. What we do know from the story is that a rainbow appeared as a symbol of hope and as God’s promise to never again destroy the earth. During the months of lockdown, rainbows appeared in windows all over Great Britain. 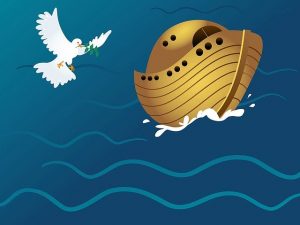 Then there is the dove who returns with an olive branch – a symbol of peace. The pandemic has taught us that we now have to work towards a more just world. As one financial writer, Arundhati Roy, said in April:

Pandemics force humans to break with the past

and imagine their world anew

– the pandemic is a gateway between one world and the next.

We can take the baggage of the past or we can go with little luggage,

ready to imagine another world and fight for it.

Max told me he had learned to cope with boredom, even though his parents had turned schoolwork into an interesting time each day.  I have learned that life won’t be the same in a post coronavirus society, yet the message of the Good News is as relevant as ever.  At the same time, I have to try to re-enkindle my mission even when I am faced with many safety restrictions.