« Night of the Witnesses » Notre-Dame, Paris 2017
Daughters of Jesus

They give their lives for Christ, come and pray for them

For the 9th consecutive year, Aid to the Church in Distress has organised evenings of prayer, tribute and testimonies, dedicated to those who suffer persecution because of their faith (https://www.aed-france.org). On this occasion, the community of the rue d’Arras welcomed Sr Marie Catherine Kingbo, one of the night’s witnesses On the Night of the witnesses 2017 the cathedral of Notre Dame was packed. Sister Yvette who took part in this event for the first time said :

« I was struck by how reverent the assembly was. The procession with the portraits of the Christians who had given their life in the course of the past year made a great impression on me, especially on seeing again the face of Father Hamel who had his throat cut while celebrating Mass here in France. The songs interspersed with the three testimonies from Syria, North Korea and Niger captured everyone’s attention. »

A witness to the love of Christ in a Muslim context

It was the testimony of Sr Marie-Catherine that spoke to us the most. The relationship bet ween her and our sisters dates back in fact to a fortuitous meeting with Sr Ethel Greene, here in Paris, 10 years ago. Around the same time Marie-Catherine, already a religious sister in Senegal, responded to a call from the Lord to make his face known in a Muslim environment. A new vocation was born in this sister already 50 years old. Welcomed by Monsignor Ouédraogo, bishop of Maradi, she chose Niger as her country of action and founded a new Congregation, « The Servants of Christ » ».

Niger is a country where the population are 98% Muslim and it has not escaped the threat of terrorism and violence. Despite the difficulties the 20 sisters and novices remain faithful to their mission :

« There, in Niger, they really have to have faith in Christ and believe in human values. In all that she does, Sr Marie-Catherine gives the best of herself so that others, in thier turn, may fully develop their potential. » « I see these young sisters as like the first sisters who founded our Congregation. They knew how to respond to the needs and calls of their day. They are like a grain of the Kingdom which is growing with difficulty in this African earth but which is full of promise. I admire their audacity and courage. They challenge me ! » 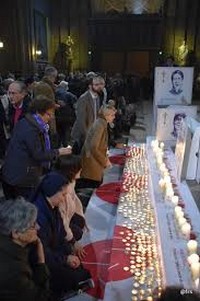 The community appreciated this opening to a context completely different from its own. They were happy too to be able to make a gesture of solidarity to help the Servants of Christ. We will keep them in our hearts and we will be even more assiduous in replying to the invitation of Pope Francis to :

« Pray for the persecuted Christians

so that they may be aware of

the support of the whole Church

through itd prayer and material aid. »