For Sister Denise Toublant, a Daughter of Jesus in Africa, the last year has been one full of surprises and discoveries. She tells us how she has experienced the action of God in unforeseen experiences and events. 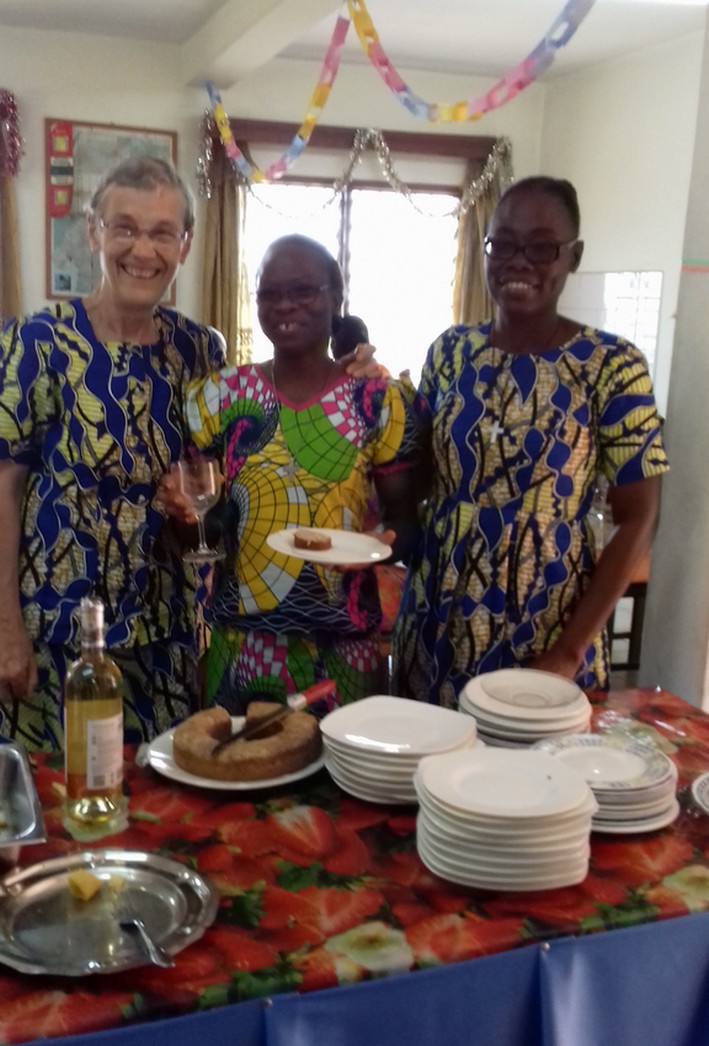 In September 2019, I left Yaoundé in Cameroon for Brobo in the Ivory Coast. There I Was welcomed by Sisters Hélène and Estelle with whom I would be in community, in the parish of St Paul, in the diocese of Bouaké.

At the beginning of the year I chose to give priority to the discovery of the geographical, human, and ecclesial reality of the environment and the country, in line with our provincial orientation “Towards a Church without borders”.

Walking is my favourite activity to keep me healthy but also to get to know a neighbourhood, a town, a village. For me it is an opportunity to get in touch with people in their place of residence, on the way to the market, to school, to work.

… “I am Regina’s mother.” (a deaf and dumb girl from the centre) as she calls her daughter to greet me. 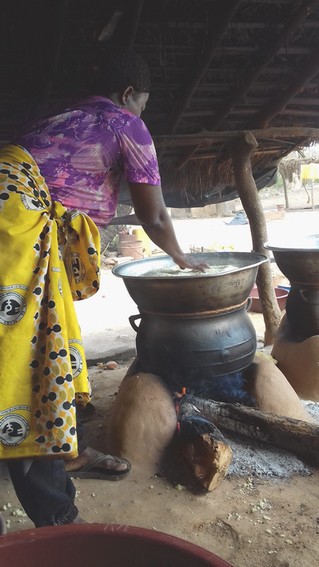 … “You can come in to greet my daddy who can no longer walk?”

“Close and united to Christ, let’s build a living Church” is the Bouaké diocesan orientation presented at the beginning of this year’s pastoral season. I chose to participate in the CEB Ste Monique in our neighbourhood to try to live this orientation together and to create close relationships with those who live around us. Every Wednesday we moved from one house to another and shared the booklet prepared by the local church: a fact of life, the Word of God, attention to joyful events, to the sick, to bereaved families.

“We don’t know each other well enough; we need to learn to visit each other to get closer to each other.”, J.B. reminded us several times. Mama Hélène asked me to come to her house to visit her husband, who is very ill, who can no longer move around, and who no longer speaks.I went regularly and shared the family’s prayer and sorrow when he died in July.

“Taking care of the common house”

How can you implement “Laudato si” in a concrete way that takes into account the reality ofan environment where paper and plastic are strewn all over the ground? I started with the concession and the outer strip of land along our fence. I sought to raise awareness of cleanliness and sorting waste with the staff, children, and animators of the Mother of Mercy Centre. The Christmas and Shrove Tuesday celebrations made it possible to raise the awareness of parents at the same time as the children. 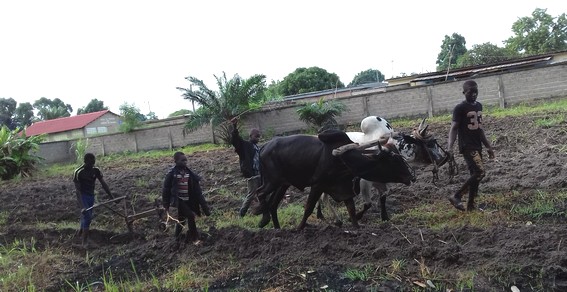 Adults are so used to throwing things on the ground instead of using the bins provided. “When I’m at the wheel of my car, I throw the paper through the window onto the road; it’s so ingrained in my head“, says a teacher father who encouraged me in this work for a more pleasant environment and better hygiene conditions. During a meeting at the Centre, Jean Louis suggested contacting the town hall to collect the rubbish. We went there together and asked for the removal, once a month, of everything that doesn’t burn and can’t be used for compost. It’s even free! In March, with social workers who come from France for a week, the seniors at the Centre made a compost bin for organic waste. 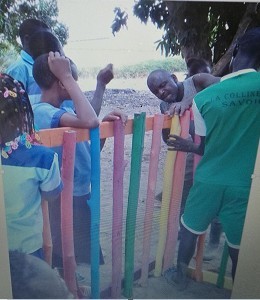 At the CEB, we also took part in an operation to clean up our environment organised on the 7th of March by the sub-prefect who had mobilised the associations and local residents. That day three young girls from the group arrived at 7am to take part in it. I recognised the secondary school teachers who are concerned about ecology and have undertaken this work in their establishment.

When I went to the school in January, after having spoken to the mothers who sell food, I discussed this question with a teacher. “Like you, I can’t stand the filth that reigns here. We’ve just come out of a meeting where we reflected on the situation and we’re going to start raising awareness with the pupils, putting in place a strategy to achieve this, by making them aware of their responsibilities.“. Three months later, I marvelled at how much the living environment had changed: protected tree plantations, awareness panels, clean land. When will there be a competition for the Brobo establishment with the most beautiful environment?

“Your ways are not my ways”

In March, lockdown was decreed in the Ivory Coast to halt the spread of the Covid 19 pandemic. All school, church and religious activities were stopped. I could devote more time to work in the field, in the house, to reading, to prayer. 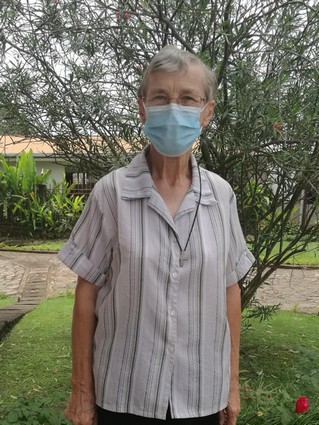 A sudden health problem arose in May: I could no longer walk without great pain. I was blocked, forced to give up walking and stay at home for five weeks, two of which were spent, on doctor’s orders,in complete rest and total isolation in my room.My Sisters took care of me, especially for meals. They even found an available TV set at a friend’s house.

Being able to follow a live Mass with Pope Francis in Rome or in a church in Paris opened me up to the universal dimension of the Church at the heart of our world so affected by the pandemic. I developed a taste for watching the news from the various continents, documentaries, listening to theological, biblical, or philosophical debates, or to a concert.

All of this nourished my faith and my prayer, in communion with humanity. On my table, I kept various books including a provocative essay on religious life by Brother Mickaël Davide OSB, which opens up a beautiful horizon,” Not perfect but happy “.

Giving thanks where I had not expected to be

I had been looking forward to going to France for my golden jubilee of religious life, to taking part in the group retreat and the celebration of thanksgiving. I was already tasting the joy of the reunion in Kermaria. Since the announcement of the cancellation, I had consented to giving up this project but I had to live the anniversary of my profession on the 15th June and the feast day in Kermaria on the 18th in the isolation of my room. The parish community of Brobo celebrated a Mass of thanksgiving for the whole group and especially for the jubilarians who had worked in the Ivory Coast.

A new call to move, to be available

To my great surprise, I received a call from the Provincial for a new mission in Karna, Cameroon. When the time came, the organisation of my departure, with the conditions and requirements imposed by the two countries, caused me a lot of concern. Even so, I had far from imagined the journey that awaited me. Irene and I left Brobo at the end of August for Abidjan, the economic capital of the country, to undertake the necessaryadministrative steps.I had not received the result of my COVID test and learnt at the Pasteur Institute that I was positive. I was one of the many asymptomatic carriers who are given a short treatment and recommended to respect the barrier measures. 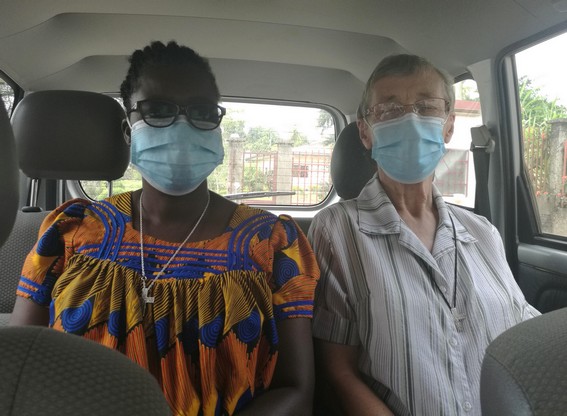 Intending to spend six days in Abidjan we found ourselves blocked for three weeks in a reception centre where the conditions were well suited to living out this period. I learnt how to get around by bus, I discovered three of the country’s five state-approved screening centres, as well as the University Hospital for Covid patients so often presented on television, and the Pasteur Institute which analyses all the tests.

I took out the New Testament from my suitcase and revisited Paul’s letters to the Christian communities. In joy as well as in trials, he faithfully continued his mission of proclaiming the Gospel which residedin the power of God. This rereading helped me to get through this time of anxiety where my only concern was to arrive as quickly as possible at the place of the mission entrusted to me. “I can do all things in Him who strengthens me” (Philippians 4,13)

Irene took off alone in the second plane planned. Two days later, when I finally boarded the plane, what a consolation! Throughout this journey, I was aware of the action of God who had supported me in different ways and allowed me to remain serene in spite of everything.

Thank you Lord, for having allowed me to return to the source in this year of my jubilee, for having made me experience once again the extraordinary power that belongs to you and does not come from us, weak and fragile creatures. I give you thanks for your wonders, at the heart of my daily life.

Look upon the Ivory Coast, our country

Grant all its inhabitants Love, Truth and Justice,

Grant that each one may be an artisan of Peace.

You are the Prince of Peace!

You promised us Peace, grant us your Peace.

Our Lady of Peace,

to whom our country is consecrated,

(An extract from the prayer of the national Church, composed 6 weeks before the Presidential election)