Giving thanks for 146 years of presence
Daughters of Jesus

The Daughters of Jesus have served the population of Grandchamp (France) for 146 years. At the beginning of September, the parish community and the town thanked the Congregation for these long years of presence and service. In the course of the ceremony, Sr Christiane Lorcy (Provincial) retraced some of their history ….

Dear members of the parish of Grandchamp and the surrounding area,

Dear sisters of the community and from elsewhere,

We are gathered here together for this Mass which marks a stage in the life of the parish and of our Congregation.

Thank you to Father Faustin who very much wanted this gathering to take place and to Armel, the Deacon. They show in this way the parish’s gratitude towards the sisters of the community and, through them, towards all the sisters who have lived here.

I also greet His Worship the Mayor, who through his function represents the population of Grandchamp. In reality the sisters who have succeeded one another in Grandchamp since 1871 have been not only at the service of the Christian community. The have taken part in the proclamation of the Gospel to everyone, believer or non-believer, through education and teaching, taking care of the sick, the accompaniment of the elderly and participation in the life of the town. Their presence in moments of distress has touched everyone equally and without any social, political or religious frontiers.

I have not counted up how many sisters have lived among you but there have been many over the 146 years. According to the years there have been between 3 and 8 sisters at a time. Their ways of situating themselves and living have followed the meanderings and evolutions of society and the Church and many among you have seen these changes. It has not only meant no longer wearing the habit. There has been the change of habitat. For a long time the community lived in the grounds of the school. Since 1975 – 1980 the community has moved 3 times. Over the same period their pastoral insertions and professional activities have also changed. To sum up, if the world has changed, sisters and religious life have been shaken up.

Already in 1990, an account of a community meeting said this : « Given the number and age of the sisters, what will become of the community in the future ? » This questioning has caught up with us today and it is not without heartache that the last sisters here today are preparing to leave.

Along with them we cannot deny a certain sadness and can only regret that we could not assure their succession … but faith and hope are stronger still. It is God who writes history even when we do not understand it. Time after time in the Bible, we hear the Lord call someone to leave, to cross the sea or the desert, to live through difficulties with confidence in him. Jesus in turn, invites us to lose our life because it is in this way that we will truly find it. It was the way he himself took : he did not die because his life on earth was a failure. He had to leave, to die, so that his Father could give him Life in all its fullness, a Life that has become our life and salvation, as well as the salvation of all human beings on Earth.

Counting on your fraternal support and your prayer therefore, we want to live this departure in serenity, hope and thanksgiving. Yes, thanksgiving for the hidden fruits that God alone knows of and which have ripened over the course of 146 years of presence. The sisters who have lived among you, those who are present, those still alive as well as those who have entered into eternity : all of them thank you and wish the Christian community and all the inhabitants of Grandchamp a peaceful and fraternal future. 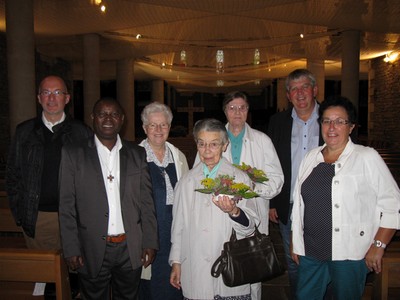 After the Mass, in the course of an aperitif, the Mayor, Yves Bleunven, presented two Sisters, Anne and Marie Thérèse, with the medal of the town.