The community of Lalbenque in south-western France, tells us about an act of generosity where confinement rhymed with giving … and receiving in abundance!

It’s midday and the meal is on the table. We are ready to 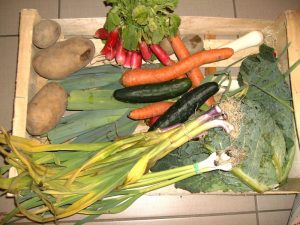 simply share it among ourselves in community but first, we need to bring in some salad from the garden, including some to give to the neighbours. That’s when we see Julie walking towards our door with a crate and a basket of vegetables … “Come in, it’s open!”

She duly comes in, puts everything down and says “It’s for you! It’s what I collected at the market, for “the Religious”!

Which leaves us somewhat bewildered.

A surfeit of generosity

“As I was picking up my basket, I asked them what they would do with what was left over at the end of the market. Would they give me something for the Sisters? … I explained that you don’t go to the “Resto du Coeur”! (an association which, among other things, organises food aid.)

We looked at her, really surprised, and replied, “But we have everything we need …”

We listed what was in the basket

“There are things you need to put in the fridge straight away: ham, fresh fish, chicken, stuffed cabbage, cheesy mashed potatoes, pâté … and then there are things to plant in your garden: salad, tomatoes, mint, peppers, pumpkin, shallots, onions, and even peas in bloom.

There’s even a bottle of wine, a Côtes du Lot !”

We said, ” THANK YOU ” to Julie !… but she was straight off to an aperitif with the vendors at the town hall.

Who were the donors?

We asked ourselves who could be behind this. Did the initiative come from Julie alone, or was it in response to an invitation we had given to the people of the village in January and February, to come and talk with us about our Religious Life and the 200 years of our Foundation in Vaylats?

(An exchange which we were thinking of continuing …) 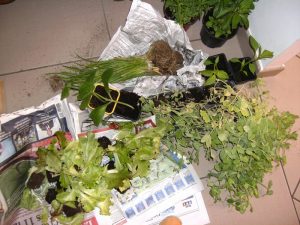 The answer is, we still don’t know!

A huge THANK YOU from the bottom of our hearts!

“O Lord, how can I recognize the blessings with which you have filled me?

Every day, I shall celebrate your greatness! Hallelujah!”

As we come together to eat, we often sing, “You ARE there at the heart of our lives! »