Encounter of the Bignan associates
Associated life | Daughters of Jesus

Saturday 9th of October was the “day of re-entry” for our group of associates of the Daughters of Jesus, at the community of Sisters in Bignan, France.

We were welcomed at 4pm with a friendly snack during which we met the three Sisters who had recently arrived in the community: Madeleine Gru, Monique Le Corronc and Marie-Thérèse Picard. 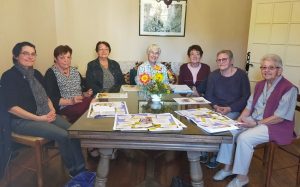 Five of us met with Sisters Marie-Thérèse Le Goff and Marie-Thérèse Picard: Denise, Anne, Bernadette, Monique and Elisabeth. Danièle, Raymonde and Bruno had gone on pilgrimage to Lourdes that morning.

After reading ten short testimonies about Mother Marie de Saint-Charles, everyone was invited to share their reactions.

Elected as Superior General at a very young age, in 1846, she had to face:

And all this with a deteriorating health. It wasn’t until 1860 that the Sisters were able to join the Mother House in Kermaria.

Pilgrimage to Our Lady of Deliverance

Then, in communion with Mother Marie de Saint-Charles and her Sisters, we went to the village of Trégouët near Saint-Allouestre, where an oratory houses a statue of Our Lady of Deliverance. 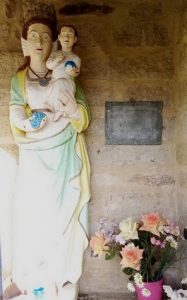 When we asked Father Jean Pédrono, a native of Saint-Allouestre, about this oratory, he gave us the following information by e-mail:

“Originally – but I don’t know the date – it was a chapel where there was mass several times a year and not only on 15 August.

In the last century, future brides and grooms also prayed to this Our Lady, the Virgin Mary, for good weather, for their wedding! 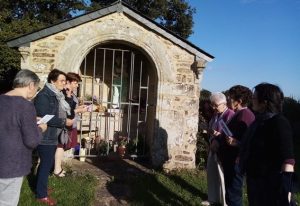 We also learned that the first Sisters, finding themselves to be too cramped in their community in Bignan, hoped to find a solution to their problems in Mary. On their return, they had already been granted their wish!

At the end of this meeting and before going to the church in Bignan for the parish mass, we decided to meet again before Christmas.