Daring to speak of him who scarcely spoke
Daughters of Jesus

A working group of five Daughters of Jesus met in Locminé within the context of the year dedicated to St Joseph, to advance a project which had germinated at the end of 2020: the production of a collection of words, speeches, and sermons pronounced at Kermaria during the feasts of St Joseph.

While preparing the festivities for the Congregation anniversaries, especially the 200th anniversary of the birth of Mother Marie de Saint Charles, we were challenged by her repeated choice of St. Joseph as secondary Patron of the Congregation (the Virgin Mary being declared the first forever). She did this when our predecessors were still in Bignan, so St Joseph has occupied a privileged place almost from the beginning of the Congregation.

As it turned out, Pope Francis decreed that the 8th of December 2020 would mark the beginning of the Year of St Joseph for the universal Church. As 2021 was the year of the centenary of the crowning of St Joseph of Kermaria, this was for us the cherry on the cake. 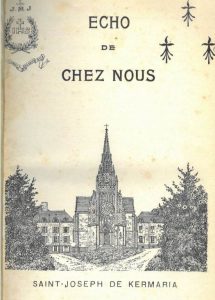 Many factors sparked off the project that we are carrying out. We had a good working tool in the series of ‘Echo de Chez Nous’. It was also a way of honouring this tool of communication and communion which Mother Marie de Ste Blandine, Superior General, and Father Jégouzo, ecclesiastical Superior at the time, desired and set up.

The project firms up and moves forward

So, the project of gathering all these scattered texts published in the ‘Echo de Chez Nous’ bulletins came to be born. By doing this, the texts will be more easily to hand, and better still, more accessible for reading. We called on the Sisters who generously undertook the task of re-reading the texts. This was a first for some of them and this audacious gesture was already a sign! Thank you to those Sisters and laypeople who took part and helped the project to progress.

Of course, other homilies have been spoken since 1970, when ‘Echo de Chez Nous’ stopped but we chose to stay with this beautiful instrument of sharing which was so appreciated over its 65 years of publication. At the same time, it is an invitation to read this periodical with curiosity and real pleasure, even for the youngest among us.

On the feasts of St Joseph, the Patronage of St Joseph on the 19th of March, and later the 1st of May, busloads of children, young people and adults flocked to Kermaria. This was organized by the parishes where the Daughters of Jesus, responsible for spreading the cult of St Joseph, worked. It is certain that their zeal was rewarded! 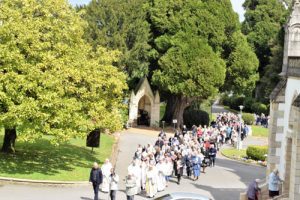 Who among us, at least those of our generation, did not have goosebumps when hearing powerful voices raise the roof of the chapel when singing “O Saint Patron de Kermaria“? The feasts of the 19th of March especially gave rhythm to our life as young juvenists or novices and to our religious life. It was almost a ‘feast of obligation’ in our Congregation, a family feast in honour of St Joseph.

Religious life has evolved, and the Church has renewed its theological and spiritual language. With the help of the imagination, popular piety has been grafted onto St Joseph of Kermaria! Some formulas or expressions may surprise us today. Let’s not get stuck there but make the necessary mental adjustment. So many anecdotes seem like miracles. St Joseph, always modest, does not expect more than that and remains secret. 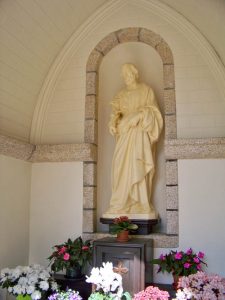 St Joseph is more than ever relevant at the beginning of the 21st century. A proof of this can be seen in the ex-votos, the candles that regularly decorate the oratory of St Joseph, at the entrance to our Mother House. In the Church here in France, there is a renewed fervour and recourse to St Joseph as a model of fatherhood. Pilgrimages for young fathers are being organised and are growing.

A collection dedicated to St Joseph

After a long and slow gestation period, lengthened by this time of sanitary restrictions, the collection is reaching completion. It will allow us to reappropriate what nourished the readers of ‘Echo de chez Nous’ and what contributed to shaping this ‘aura‘ from which St Joseph of Kermaria benefits, especially in Brittany.

Let’s hope that we, the Daughters of Jesus, through our modest initiative of producing this booklet, and through our daily life, will continue to propagate and deepen the cult of St Joseph, as Mother Marie de St Charles committed herself to do in our name!

“The publication of ‘Echo de Chez Nous’ was the wish of Mother Marie de Ste Blandine and her council, as well as of the Father Superior of the Congregation, Father Jégouzo. They wished to create a monthly bulletin which would be the voice of Kermaria, this blessed house which the sisters love as the cradle of our Religious Life. This voice will be heard in all the countries where the sisters are: France / Belgium / England / Canada / the USA and Natal. This bulletin is written by the sisters; it will speak of what can interest and edify them. We will be harvesting at home, but we will also be gleaning from you: the ‘scattered’ sisters.

This was an invitation to involve every sister and every community in the writing of each bulletin: these will be the working materials.”

Taken from ‘Echo de Chez Nous’, October 1905, a periodical of the Congregation until 1970.