Being an immigrant with immigrants, a Walk for Solidarity.
Daughters of Jesus

To speak of an immigrant is to enter right away into complexity, since we assume it as an identity, we put into play the experience of each person, in the sense of belonging. 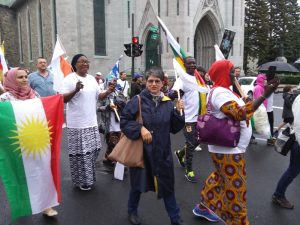 Therefore, from my own experience, I can side with immigrants who have everything to learn from the culture that receives them.

Immigrants often experience a total break from their way of life in their own culture… with regards to food, clothing, or having to go from tropical to seasonal climates:30 degrees Celsius to minus 20 degrees, or in having to learn a totally new language along with all its particularities and expressions in order to be understood and feel involved in this culture that welcomes them. In fact, for some it is like starting again as a child, born in an unknown physical space, and for others, it is taking root and advancing in building a new identity.

In my situation, I have the advantage of feeling somewhat as we do in a family. Every sister Daughter of Jesus at Kermaria where I arrived a few months ago, was concerned about me and took care of me: helping me with a specific word, or giving me the meaning of other words, indicating where to go for warmer clothes …among many other fraternal gestures. And finally, with a certain assurance and joy I was able to answer the question that was constantly put to me the first days: “Are you lonesome for your country?” to which I would reply with a “no” that did not seem very convincing for some… who told me that my facial expression didn’t correspond to my statement! So, I must also learn to speak with gestures…

Becoming aware of the situation of immigrants

The other advantage is that I did not come to Canada because I felt threatened in my country or because I was seeking refuge, which is the case for many people who are living this process as immigrants here in Trois-Rivières. I came because I was interested in understanding the situation of immigrants and within only 5 months I had already met with different situations. Out of respect for the people I met who shared with me their pain, their anxieties, I will only express a few generalities. The majority are people who have managed to arrive with a few family members, and in other cases, some have left their country, and were sent to different parts of the country that welcomed them, causing a double separation. There are also families fragmented by erroneous decisions in marital relationships or because of infidelities, and in the latter case, the most affected are children who have to be in foster care while the organization for child protection tries to solve the problem.

On the other hand, Canada has organized programs set in place to minimize the 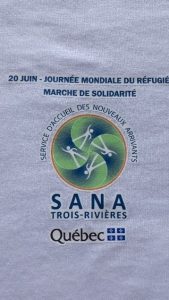 difficulties of immigrants, especially for folks arriving in a culture very different from their own. The SANA organization looks after those who arrive for the first time. It is called “Welcome Service for Newcomers” and with this organization I had the opportunity to participate on June 20th of this year in a solidarity march as part of World Refugee Day. It was an experience in which I felt close to people from the five continents, connected by one language, French, that united us at the moment and made it possible for us to engage in a conversation and express what we are going through, how we are coping and what are our dreams for the future.

I come from a country where protest marches are usually repressed by the police with tear-gas to disperse the crowds. Here, to my great astonishment the police escorted, led and closed the caravan with great respect, even welcoming the protests, slogans and songs from the marchers! That was a great surprise for me: here, people have the right to demonstrate peacefully and are treated with respect for doing so. 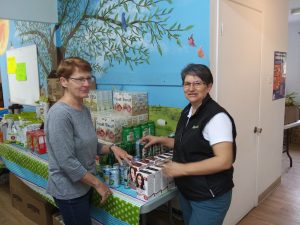 After a few months, I also collaborated in a foundation called “House Coup de Pouce” that the Daughters of Jesus began 20 years ago, and which is now managed by lay people. There we help with the distribution of food. We welcome children, youth and families offering them various activities. The majority of these families are foreigners or poor people living in this sector. Within this foundation I have also been able to listen to difficult family situations and, despite my little French, manage to convey their grievances to those responsible within the foundation, so they could better help Latin American immigrants in their difficult life situations.

“Interculturality” impels us to have an open heart

Finally, in this situation various questions arise: how can the immigrants forge a new identity, which can no longer be that of their place of origin but which is not yet that of their new environment? Will this new identity be that of a mixed-race, or of a transnational nature, the ones that will dominate our societies in the near future? I am quite sure that this will take place in the not too distant future since what I’m certain of is that “interculturality” requires us to have an open and available heart, without thinking that what is unique to their country is all that exists. We can expect that some immigrants in this city of Trois-Rivières will surely marry Canadians…

Jesus who challenges the Canaanite woman 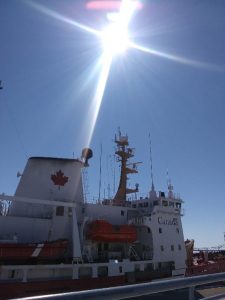 (Mt. 15: 25-28) This woman approached Jesus, knelt before him and said, “Lord, help me!” Jesus said to her, “The children’s bread should not be thrown to the dogs.” The woman replied, “It is true, sir, but even the little dogs eat the crumbs that fall from their master’s table.” Then Jesus said to her, “Woman, how great is your faith! Let it happen to you according to your desire”! And at that very moment her daughter was healed. That’s why I consider this woman as having shown Jesus the horizon of humanity beyond that of his own Jewish culture. Jesus opens his heart and recognizes faith in her and he grants her what she wants. Similarly, the majority of Canadians are open to immigrants and are committed to offering them not only a warm welcome but also a willingness to share their bread and lives with them.

I thank my Province of Latin America and the Vice-Province of Trois-Rivières for allowing me to live this experience in the very midst of all the changes the Sisters here are presently going through and to have the chance to assist them in different ways. I will surely have the opportunity to share with you at some other time.

To embark on this journey, where the light coming from the sky is shining, is synonymous with the opening of our congregation – the Daughters of Jesus – to our different realities, but always with the same conviction of being followers of the same Lord of Life. . Thank you.