Another regard
Daughters of Jesus

A celebration in the parish church of Saint Benoît in Rennes, France, on the 10th of June brought together people who had been close to Sister Rose-Marie Hervé. As they testified to her attention to everyone, they showed us another face of her. 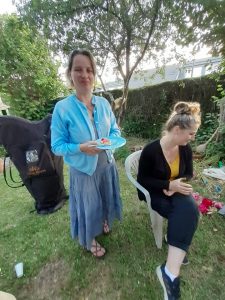 The celebration had been requested by a neighbour, Brigitte, who loved Rose-Marie very much and who wanted to involve people who had not been able to attend her funeral at the Mother House in Kermaria Filles de Jésus in April 2020 because of the pandemic.

It was a happy initiative that brought together friends of “Rozenn“, including a group from nearby Saint Jacques de la Lande. Great testimonies enabled us to get to know another Rose-Marie.

Jean-Marie, the baker, to whom she had dedicated a poem in 2011 which he proudly displays in his shop, spoke in a very moving way, without notes. He said how much Rozenn had marked the neighbourhood. She addressed a hello, a smile, a little word to everyone, not only to himself but also to the hairdresser, the road sweeper, the people in the street, the local Muslims, Marie-Thérèse in the drycleaners. 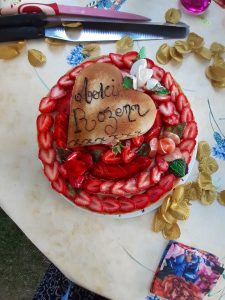 In the community, we were sometimes a little worried that she would disturb the neighbourhood, but apparently, we were wrong.

One phrase from Jean-Marie particularly marked us…. “And Jesus passed by doing good” … words he indirectly attributed to Rose-Marie. 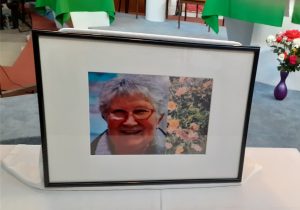 When it was Brigitte’s turn to speak, she underlined, with tears in her eyes, the attention Rose-Marie given her after her accident and when she had great difficulties in her life. Rozenn knew how to find the words to prevent her from sinking too deep, and encouraged her to find the light again, by composing a poem for her: “Go towards your source“.

These words of comfort helped her to bounce back and find the source from which she had strayed, namely the faith of her childhood. A beautiful friendship, she said, lasted over time not only with her, but also with her sick mother, who died a few months after Rose-Marie.

Another aspect of Rose-Marie’s personality 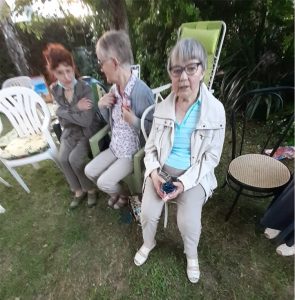 As I had lived with Rose-Marie for 15 years, the community wanted me to speak on their behalf. Many people in the assembly knew her, so I said all the positive things about her, but then allowed myself to say something a little livelier about her personality. Said with humour, it went down very well.

“An important aspect of religious life is community life. And there, let’s be real. It was a bit more difficult because Rose-Marie had a strong temperament which clashed with other strong temperaments. It was sometimes stormy but as she was neither mean nor resentful, everything ended up working out. After a force 6 or 7 storm, the sun came out again, as did her smile. 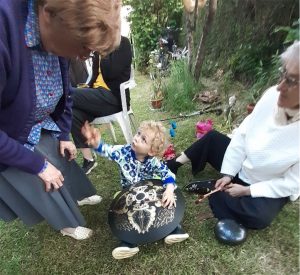 Yes, Rose-Marie, like everyone else, you had your qualities and your faults, but true love accepts the other in his or her difference. That’s where you recognize true community. “

Everyone smiled and Jean-Marie, the baker, told me, “That was very good, true and honest. ” I think that those in the congregation who had lived with Rose-Marie would not contradict me.”

A time of conviviality 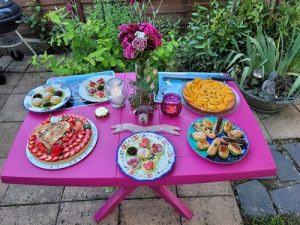 Brigitte then received us in her garden for a buffet entirely offered by Jean-Marie: sandwiches, sweet and savoury canapés, as well as a big cake decorated with “Adieu Rozenn”. Another cake had been made by Bernard, a friend of the community. Don’t salivate too much, the leftovers have already been eaten!

After all these meetings, we said to ourselves, “A Sister can be a bit difficult to live with in community and still have an important impact outside”. Let’s accept our differences. Thank you, Rose-Marie, for this life lesson.

Go to your source

There is for you

Go, to the end of your road,

but moderate your pace.

Don’t run out of steam,

it’s of little use.

Take care of yourself.

Let yourself be helped when you are tired.

Take care of the body,

that no longer wants to respond.

Look on it with gentleness,

when it no longer wants to believe.

In its stiffness, it asks you for so much tenderness,

even a thousand kindnesses in taking care of it.

Go forward, don’t hold it back,

Rather take the path with it.

Go, towards your inner source.