The Sisters of the community of Santiago de Chile share with us how the pandemic is helping to denounce the old neo-liberal system. The people therehave worked hard to cook“common pots”, particularly in the commune of Lo Prado, from where around 300 lunches part for the sick and disabled in need.

There are currently thirty‘Ollas Comunes’ or ‘Common Pots’in the municipality of Lo Prado, where we live, to the west of the city of Santiago. In our sector there are two that serve theneighbourhoods of O’Higgins and Cañada Norte.

The beautiful and remarkable thing about this activity is that it is free of charge in a system where money comes first, and everything is bought and sold. The people help each other with free food, and itis a demonstration of a new solidarity between neighbours that is so typical of modest people. At the same time, it is a gesture of resistance and a denunciation of the inadequate response of the government to the growing poverty that has resulted from the still unresolved social explosion of October 2019.

The Common Pot breaks down the coldness, calculation and selfishness that the neoliberal system has forcefully implanted in the country. It is communal teamwork, involving many people: those who contribute food, those who prepare it, those who cook and those who distribute. In this sense, for us believers, it is a tremendously prophetic gesture of denunciation. Simple people organize themselves with dignity and help each other in solidarity; they bring to life the Good News of Jesus of Nazareth.

Origin of the ‘Ollas Comunes’

The Common Pots are not a 2020 invention, nor of the time of the Dictatorship when they proliferated throughout the country for the same reasons as now. They originated in fact in the early 1930s, at the time of the worldwide Great Depression.In Chile, the mining workers were hit particularly hard. Thousands of miners in the north of the country who worked in the export of copper and saltpetre were left unemployed, without wages, and so forced to migratewith their families to the capitalin search of better prospects. There was no valid response to their dilemma. It was thus that the common pots came about to help these hungry families from the north. 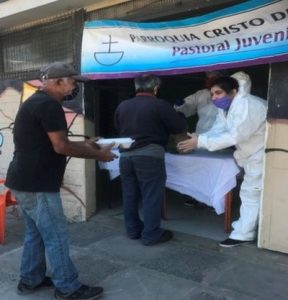 When governments are inept with their answers, do not look for ways to help, or do not want to give solutions, the simple people come promptly and affectionately, with an effective solidarity. For the same reasons as in the past, the Common Pots have flourished again today.

Our solidarity with the neighbours 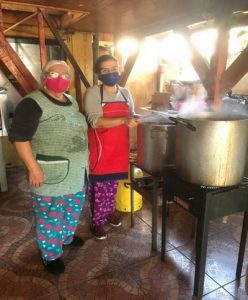 In spite of the quarantine that slows us down with its ongoing presence, we support this beautiful work. There are two pots that are enough to provide lunches twice a week.On Saturday and Sunday, they offer snacks, home-madebread, tea, chocolate and coffee.

At O’Higgins, the pot is run by a group of young people from the parish pastoral group. The mothers and grandmothers do the cooking at home while the young people help with the preparation and distribution of the food to the nearby 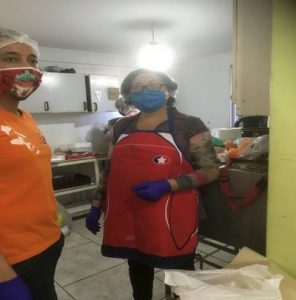 neighbourhood. The people come with their pot or container. Other young people distribute the food to the homes of sick or disabled people. Around 300 lunches are served.

The dynamic is the same in Canada Norte where a group of neighbours cook in premises put at the service of the community. The young people welcome those who arrive while others deliver meals to the homes of the sick or handicapped. They manage to serve 230 meals each time. 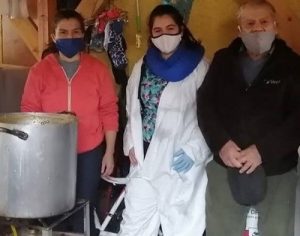 In times of disaster, people, but especially the poor, come togetherand organize themselvesto offer concrete answers rather than promises. It makes us think back to origins of Christianity, andto the legacy of our family, the Daughters of Jesus. For this reason, we try in Chillán as well as in Santiago, to respond by accompanying the project, and by allowing ourselves to be: 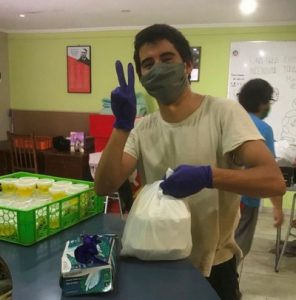 “confronted by the challenges of our time, and to collaborate in new projects with a faith that is prepared to take risks.”(Acts of the General Chapter, 2016, p. 6.)

most deprived. Like Jesus, who was concerned for the outcasts of his day, we

charism of the Congregation, we take up the cause of those who have no voice or

who are the victims of injustice?” (Rule of Life no 17)