Our shared act of thanksgiving !
Testimonies

We were invited to bring the year to an end with a time of shared prayer. 2016 had already been rich in regular community meetings, but this was now an occasion where each one could express what sprung up from her heart on thinking about the past year.

Sisters from the neighbouring communities of Lalbenque and Cahors joined with us, as well as some Sisters passing through from Libos-Latronquière who were happy to take part.

Each one was invited to write her personal prayer on a star. All of the stars then formed a garland in front of the creche. There were 27 stars in all, some with a prayer of thanks or a supplication, others with a word from the Gospels or a spontaneous expression that came from the heart.

Here are some examples chosen at random :

« I give thanks for all those who have lived the jubilee year of mercy and in so doing have shown mercy to and received mercy from those closest to them. » 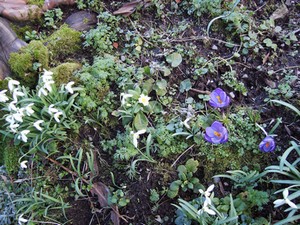 « Thank you for the meetings with the sick that you have placed on my route, so much suffering and so many households torn apart, but also so many welcomes and meetings in faith ! »

« Forgive me for my indifference in the face of the cruel situations of today : hunger, violence, torture … may peace come to the martyred people of Syria ! »

« I give thanks for having the Holy Mass daily. » 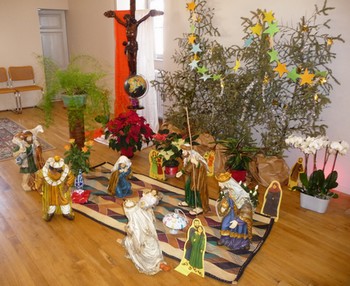 « Thank you for all the little gestures of peace that we see between us. »

« Thank you for being there. »

The beautiful garland of stars has stayed before the creche ;

a magnificent symbol of unity in diversity ! »

Sister Ste Thérèse and Sisters of the Community of Vaylats