A missionary life
Daughters of Jesus 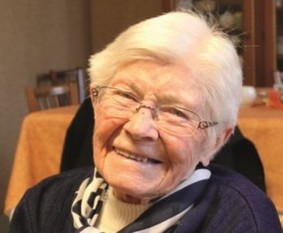 Sister Anna-Maria (Julienne Le Ray), of the Congregation of the Daughters of Jesus of Kermaria, 101 years old, was a missionary in Cameroon for almost 40 years.

A life of service of the poor and illiterate, helping them to know and love the Lord.

Born in Plumergat, a village close to Sainte-Anne d’Auray (France), I have been a sister for 81 years. When I was 7 years old, after my First Communion at midnight Mass, I remember my father showing me the baby Jesus, naked in the creche: “Look how poor he is, he doesn’t even have any clothes!” From that moment onwards, I decided that I would look after poor children.

We were eleven brothers and sisters and I was the ninth. Seven of us gave our lives to the Lord. Four of my brothers became missionary priests or brothers and two of my sisters religious sisters.

At home we spoke about the missions. The evening before my religious profession, they asked me:

“Are you ready to obey and go wherever you will be sent?”

I replied: “Yes, but I would like to go off to the missions!”

… Being a missionary is going to the aid of the poor, of those who are not educated, but it is above all helping them to come to know the Lord. Today, I go around the world in my prayer! The Sisters send us news and I pray for them …