“Today the 11th June 2017, we wish to mark, not our Sisters’ leaving the parish, but their 79 years of generous and fruitful presence among us. We can readily say that Thérèse and Denise have revealed to us a facet of the Blessed Trinity”. Such were the words of the celebrant during the thanksgiving celebration organized by the parishioners. The two sisters share with us some highlights of this special occasion. 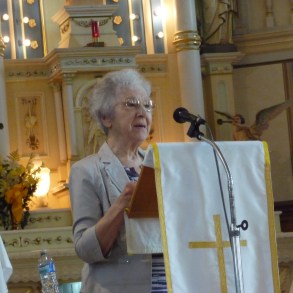 During the thanksgiving Mass, Sr Denise Héroux spoke on behalf of the 71 Sisters who have worked at St-Séverin over the course of 78 years.

« The first four Sisters arrived in 1927 to be in charge of the school. Over 44 years, 63 Sisters carried out their mission of education and presence. Following an absence of 11 years, the Sisters returned, in response to a request made by the parish priest, Robert Crête, to have Sisters present in the presbytery. During 35 years, 8 Sisters fulfilled this mission.”

“We are the face of God, the reflection of his love.” 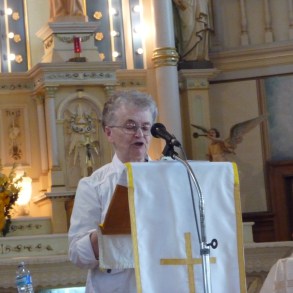 Among these, Sr. Thérèse Foley was named pastoral worker in charge of the parish in 1996 and remained so until June 2017.

“For our part, as Daughters of Jesus, we tried to live in close proximity with the people, welcoming them, being attentive to them and supporting them in difficult times.

As far as the people were concerned, they always showed affection and gratitude for our presence among them. The parishioners shared how they had perceived our charism, and “we in turn discovered the face of God” in the people we encountered.

The parishioners chose to show their gratitude and friendship 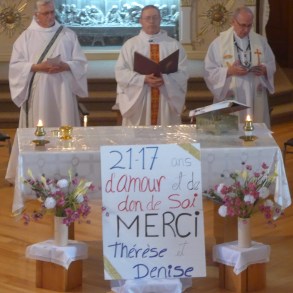 by organizing a special Mass with the participation of both the youth and adult choirs. A festive meal followed. http://www.paroisseprouxlville.wordpress.com

“Our best manner of showing our appreciation to the Daughters of Jesus for their witnessing among us and for what they have accomplished in our midst will be to continue their work so that Christ’s message may continue to spread.”

“Life in your midst, lived out in fraternity, solidarity, in an active and attentive presence has had an influence on our lives as well as on yours. On behalf of all the Daughters of Jesus who had the opportunity to live and work here, accept our thanks.”

“As for me, I am not often seen at church… but I want to tell you that we are going to miss you…you are women of conviction … Just to see you passing by was an invitation to be become better.”

What will remain of the passage of the Daughters of Jesus at St-Séverin?

What have we sown here as religious Sisters? Surely the trace of God by our presence …

We have perhaps also been able to make the hope spring up that each one of us will continue again on his or her route after this crossing that we have been called to live together.