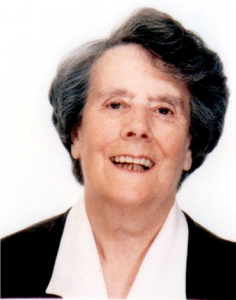 Teresa McLOUGHLIN, in community at Westgate, England, died on the 4th May 2017. Born in Colne, Lancashire on the 4th Marsch 1933, she made profession on the 4th August 1951. She was a teacher by profession and had been a Sister for 65 years.

Her funeral will take place on thursday May at 11 o’clock in the chapel of the community of the Ursuline Sisters, Westgate on Sea, followed by burial at Margate cemetery.

Teresa was brought up in a closely-knit, hardworking family; her father was a Mill Foreman in an area where there wasn’t a lot of money. She was affected by the early hardships of this time and the effects of growing up during the wartime restrictions. From this she developed a strong social awareness, and wherever she was asked to serve, in her adult life as a Religious Sister, she set up Clubs and networks to help and support poorer families.

Teresa was very proud of her northern roots and suffered from the cultural difference between the South and North Country and the perception of the North at that time. There was more to the North than the cotton mills and what they contributed in Victorian times! From her youth her Faith meant everything to her and family ties remained strong, as well as the love of her beloved Lancashire.

She entered Religious Life at the age of 16 and made Profession aged 18. She trained for teaching at Maria Assunta Training College and subsequently devoted most of her working life as a teacher: more than 40 years – mainly in the south-east London & Kent areas.

Her first teaching post was at St. Stephen’s Primary School in Welling, Kent. She was a good teacher and loved her work and was much appreciated by colleagues and parents. Later, as Head Mistress, she showed her leadership skills. One colleague says: ‘She was very good to work for. I respected and loved her. She led with a firm hand, but she trusted and encouraged us, and gave her staff confidence to work to their full capacity. They were very happy times.’

Sr. Teresa was tireless in looking after the children in her care. One lunch time one of the supervisors came to the Staff Room to say that a man had run into the playground. ‘We had a phone call from the police to warn us that a man had tried to rob the bank and had escaped towards us.’ Sr. Teresa ran into the playground, where the man was climbing over the railings towards the railway line. Sr. Teresa grabbed his leg and he was powerless. The police arrived and said “OK, you can let go now. We’ve got him.” He was certainly no match for her!

One Sister says: ‘My memories of Teresa McLoughlin go back to our noviciate days and early religious life when we lived together at Maryville for 11 years. We prepared for our final vows together and had some interesting discussions, questioning traditions and habits that we had inherited from our Breton founders in England: way ahead of Vatican 2!’ She had a great interest in history and could really bring ancient times to life. To visit London and the Tower with her was a history lesson in itself.

She was a pleasant person in community, creative, sharing and thinking up new ideas for celebrations: Christmas /Easter and feast days.

Sr. Teresa could have been successful in many different careers. ‘I always thought she would have made a good Lawyer!’ said one person, ‘But instead, she devoted her life to God. He does not give OBE’s or knighthoods, but her reward is in the children she taught and the love and example she gave them.’ Prayer was a ‘basic’ for her: the door of the classroom would open and a child would come in with a note saying “Pencils down, Hands together” then a copy of a prayer … “Ask & you shall receive…” In any crisis or need she would always say: “Pray…” She really did believe that “More things are wrought by prayer than this world dreams of.”

Sr. Teresa was always determined to have a new school, to replace the old pre-fabricated buildings beside the Church. Her efforts were finally successful, resulting in a beautiful building. When it was achieved she retired to enable a new Head to take the school into the future.

In spite of her many gifts and achievements she had a very poor opinion of herself, preferring always to take a secondary role. She was kind-hearted to a fault and had a strong sense of justice – others always took pride of place over Teresa herself. Although shy and retiring, when necessary she could and would take the lead. She enjoyed entertaining guests and was a good conversationalist.

After retiring from teaching she continued the pastoral work she’d always had at heart: at first 9 years in Peterborough; later, in 2000, she returned to the North, to Colne at a request from the Parish Priest. Here she was greatly appreciated, along with her companions in the Community, and by the good neighbours and parishioners.

Finally, in 2016, she bravely recognised that the time had come when the Community could no longer be sustained, and accepted to come south again and be part of the Community at Westgate on Sea. One year on she quietly and quickly slipped away.

Remembered by her lovely smile and willingness to render service, we say good- bye and thank God for Teresa’s life, as we commend her to the love and mercy of God to whom she had committed her whole life so many years ago.