Anna O’DRISCOLL (S. Mary Finbarr), 1921-2016, Province Angleterre
In the communion of the saints 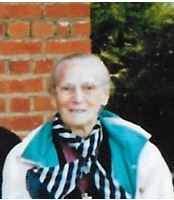 Anna O’Driscoll or Sr Mary Finbarr –as many of us remember her.

Anna was born in Glenville, Co. Cork on 3rd May 1921. She was the second youngest of a large and devout family living “at the bottom of the mountain”.

She was a student at the local school and, like her brothers and sisters, helped on the farm and in the house where she learned the values that remained with her lifelong – her faith, willingness to help other people, common sense, hard work and endurance. There, too, she picked up the many skills she brought to her busy life.

She came to England in about 1947 where she worked in the War Memorial hospital on Shooters Hill in London. She soon became known in the local parish of Welling, Kent where friendships were built and she became a valued member of the parish. It was here, perhaps with the example of the good priests and her own deep faith and commitment to the Church that Anna heard and responded to the lord’s call to become a sister.

In those days it was customary to spend a short while with a community before going to France for her novitiate. Anna was older than the youngsters who were in the pre-novitiate household, but she braved the generation gap and generously learned to follow a timetable and way of life very different from the one she had left.

She went to the novitiate on 8th Sept. 1951 and made her vows in May 1954. Immediately after her profession Anna was asked to help in the sisters’ infirmary in the Mother House. Here she showed her innate qualities as a nurse and carer while waiting for her “posting” or “obedience” as we call it today.

In the summer of 1954, Anna came to St Joseph’s Grammar school in Abbey Wood to take up the responsibility of Canteen Supervisor, which she did with skill and creativity. The budget was tight in those days but Anna had been brought up to manage carefully, with what was there, and she soon became respected for her management and abilities in the different catering areas. Anna made her mark! She didn’t wear her heart on her sleeve, stood no nonsense but under a sometimes severe exterior, she was considerate and understanding – and if you were blessed with a smile from Anna, it was something you remembered.

Besides this responsibility, Anna was sacristan for the community which was no small task in those days when there was daily Mass, services for the school and other major events to organise and attend to. Any spare moments would find Anna busy at the sewing machine or carefully repairing some sacristy item or one of the priest’s shirts or jackets.

After 13 years in the Canteen, Anna was asked to go to Massingham, our retreat and conference centre in Norfolk, where the cooking was added to her catering responsibilities and household skills. Besides the community duties, Anna found time to visit needy neighbours and to be part of the Diocesan newspaper team. She made good friends here and enjoyed the work of planning the layout of the paper, the team interaction and the wider interests and events in the Diocese.

By 1973, major refurbishment at Massingham meant that Anna could take a break. She choose a year in Maynooth College where she delighted in the international company, the broad sweep of lectures as well as being in her own country for a while. She was someone who’s affections ran deep, and family ties were maintained and deepened alongside other responsibilities/duties.

She returned to Massingham after her sabbatical period and devoted the next 26 years to the art of cooking – and that is what is was for Anna! She was an artist. She loved doing the special cakes, desserts and salads which gained her a reputation that went far beyond the gates of Massingham! Those who came as guests made a point of calling into the kitchen to see Anna and thank her – and that, for Anna, was reward enough. She never sought attention, but like most of us, appreciated being recognised. She often had some willing, or sometimes, commandeed helpers, including dear Mrs Manning who was helper, counsellor, companion, not only for Anna but for us all. It was often in the kitchen that Anna’s dry Irish wit would surface with a remark from the side of her mouth and uttered without any change of face – so that if you didn’t quite catch what it was – and it wasn’t easy to catch what Anna said – you were left wondering … did it need a reply, was it a joke … There will surely be a wonderful party in heaven when so many of her family and friends will be reunited!

In 2000 with the closure of the community of Massingham, Anna came to Westgate, where she made good use of her time visiting, making cards and keeping in touch with family and friends.

Anna had struggled bravely with poor health all her life, and after a major stroke in , she was admitted here to Lourdes where the constant care and love enabled her to to cope with the long years of inactivity. Her quiet faith, patience and acceptance of her situation over the last 8/9 years have endeared her to staff, and those who came to know her. She loved to greet those who came to visit her, sometimes to say a Hail Mary or just to be with her. Her smile brightened her face and the hearts of those who were blessed by it. We thank God for her now, and entrust her back to the Lord.