Rays of Hope in Dominica
Our life | Daughters of Jesus

Seven months after the passage of Hurricane Maria in September 2017, Sr Annita Peter, a Daughter of Jesus on the island of Dominica, reflects on this horrendous experience. As her country works towards reconstruction, she manages to find signs of hope.

Amidst the shocking devastation caused by Hurricane Maria, 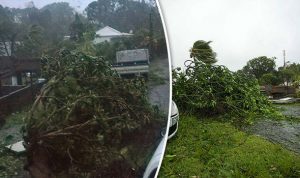 there are rays of hope, beautiful things to celebrate. Nature and people were knocked down with a vengeance during a Category 5 hurricane, on the fateful, memorable night of September 18, 2017. What a phenomenon! It seemed that all was lost, never to return, but nature took the lead, spreading rays of hope, uplifting a stricken, down-trodden people, challenging all to collaborate, in an effort to pick up the pieces and re-create something beautiful, which will be more climate resilient and hopefully secure. 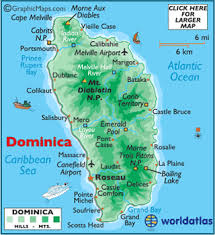 The sense of security vanished, after the landscape of our pristine island, Dominica, was savagely attacked by Hurricane Maria. Within hours of her unwelcomed, miscalculated, intrusive and invasive visit, our gorgeous forest was laid bare, with once majestic trees stripped to the core, standing, twisting or lying naked in pain, with their glory and splendour stolen. One was left to wonder whether a raging bushfire had engulfed the entire island from coast to coast. 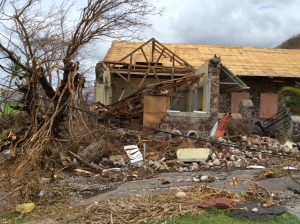 The sight dampened the spirits of a people who cherish nature and are like a fish out of water without it. Tons of logs and huge rocks were scattered everywhere, on the mountains and hills, in the valleys, on roadways, along streams, in rivers, and on the beaches. So too were the numerous pieces of galvanized metal, some of which were formed into what seemed like accordions, on display for public viewing. An uncanny sight that left many perplexed, overwhelmed, briefly paralyzed. 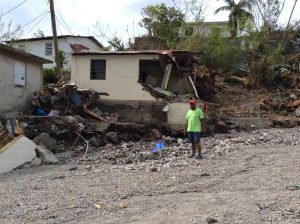 hundred and sixty-five rivers suddenly turned into its enemy. Hurricane Maria, in partnership with our rivers, expanded their boundaries and inundated every space, garden, house, and roadway in their path. Utter destruction everywhere and worse yet, some houses with their living occupants were washed away, perished in the darkness of the night, leaving our nation in shock, to mourn the death of adults and innocent children. In the village of Pointe Michel, where I work, a family of nine perished; two of the adults were employees of St. Luke’s Primary School and three of the children were students, all of whom I communicated with a few days before Hurricane Maria. The other children of that family were past students of my school. A traumatic experience for the St. Luke’s School family! 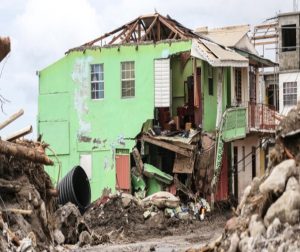 Hurricane Maria had absolutely no respect for Churches, schools, hospitals, business places or dwelling houses. Buildings of all ages, sizes, and shapes were at the mercy of its fury and were viciously battered. By morning, ninety percent were compromised in some way, as roofs, windows, doors and the like were shattered, disappeared or took to a rather long flight away from base, some never to be seen again. The wreckage was astounding, horrifying and threatening. People asked whether the world was coming to an end as they walked around dazed, depressed, hopeless, helpless, confused, haunted by penetrating, eerie sounds created by Maria. But that was not the end; within days, there were rays of hope from nature, the Caribbean and International communities and the solidarity of our people.

Nature came alive within days and perked up the spirit of the Dominican people. Inhabitants of this land, who took the ordinary things of life for granted, began to appreciate them. The lush vegetation, the water flowing in the creeks and rivers, the chirping sound of birds, the dance of butterflies, the whispering sound of the breeze, the warmth and light of sunrise, the magnificence of the sunset and its invitation to rest, the company of family and friends, the storytelling with laughter and tears, the recognition of and conversation with a stranger, the cup of coffee from a neighbour, generous sharing of possessions, long walks, the togetherness and much more, were treasures, rays of hope post Hurricane Maria.

Among the treasures to celebrate are the Caribbean and International communities’ response to the plight of Dominica. Numerous volunteers from an array of organizations arrived on our shores in quick time. With them were tonnes of food, water, and other supplies from generous donors and nations the world over. Volunteers worked conscientiously to provide medical care, food and drink, temporary housing and psychological support to our people. They cleared and cleaned the roads, transported debris among many other significant activities which contributed to our people’s health, safety, and well-being. A remarkable show of solidarity and love for which we ought to be grateful!

The Daughters of Jesus of the District of Dominica were also traumatized by the horrendous violence of Hurricane Maria. The experience afforded us the opportunity to identify with all who were attacked by this infamous hurricane. Like them, we celebrate the rays of hope and continue to work towards the reconstruction of our abode and places of work. We share the hope received and accept to accompany God’s people on the journey towards recovery and the creation of a climate resilient nation. 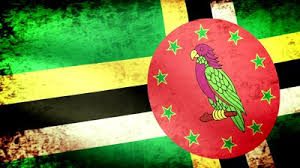 God our only hope is with us!

We celebrate the manifestations of hope which are rife among us.