his dream of getting

to know the mother house of the Daughters of Jesus 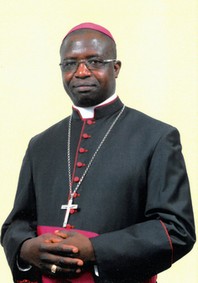 Who is Mgr Emmanuel ABBO ?

Born in 1969 in Karna, Cameroon, he attended primary school there and was the attentive pupil of Sr Clémentine Téguel. After finishing secondary school at Masenot College he studied at the University of Yaoundé. In 1992 he entered the senior seminary at Maroua in northern Cameroon. Ordained as a priest in 2000, he rapidly assumed responsabilities at diocesan level.

From 2005 onwards, he was education secretary, parish priest of Gada Mabanga (a neighbourhood of N’gaoundéré), where he built a very large church and a health centre. At the same time he took on the responsibilities of Director of the Pontificial Missionary Society, diocesan financial director, coordinator of Codas Caritas (the development agency of the archdiocese of Garoua) and episcopal vicar in charge of administration.

After the death of Mgr Djida, Pope Francis named him Apostolic Administrator of the diocese. Finally, on the 5 March 2016, he became the third Bishop of N’Gaoundéré, to the great joy of the priests, religious sisters and Christians of the diocese.

A short stay at Kermaria 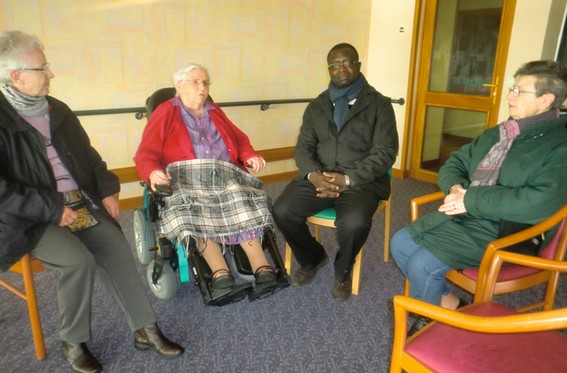 Arriving from Rome Mgr ABBO was welcomed at Vannes station. After a rapid visit of the town centre and the cathedral where we evoked the memory of Mgr Plumey, it was en route for Kermaria. Several former missionary sisters who knew him well were waiting for him at reception. What happiness to see each other again ! As the weather was clement, we began the tour of Kermaria with a visit to the cemetery where several of the sisters who worked in Cameroon are buried. From there he could also admire the view of the ensemble of the bulidings. 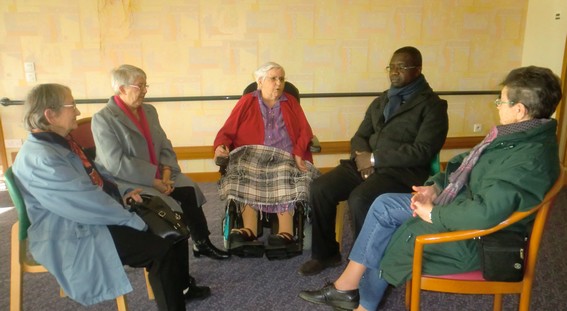 In his presentaiton of his diocese, Monsignor insisted on the good relations that exist between Christians, Catholics and Protestants, and Muslims, a different situation from that in other countries. He asked the sisters to pray for him and his large diocese which has 28 parishes and 48,000 Catholics.

The next day he met with Sr Odette Le Tutour, vice provincial, and our chaplain with whom he shares his first name Emmanuel. During a visit to the Sainte Famille, Mgr was happy to meet up again with Odette Tancry and Christine Merlet. Together they relived many memories and exchanged news of different people.

We also wanted to present to him our doyenne, Sr Marie Joseph Le Tallec (107 years old), who did not hesitate to sing her favourite chorus for him. Mgr declared himself impressed, and moved even, by the wise words and serenity of Sr Marie Joseph.

After a last photo of Monsignor with Sister Julienne Le Ray, 101 years old, (Anne-Maria), one of the founders in 1953 of our mission in Cameroon, and Sr Julienne Kervadec, who also arrived early in Cameroo, it was time to think of the return journey.

Mgr Abbo said he was very happy with his short stay and hoped to come back to Kermaria one day. Why not come back for one of the Feasts of Saint Joseph, whose staute we offered to him ? 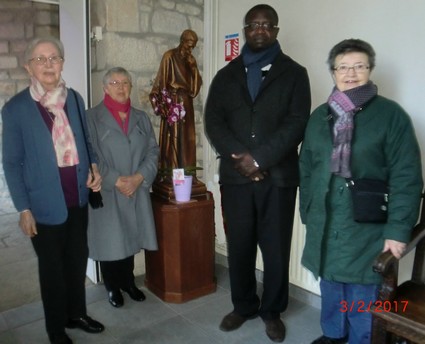 « Good-bye Monsignor ». Our prayers go with you and once again, thank you for your visit.