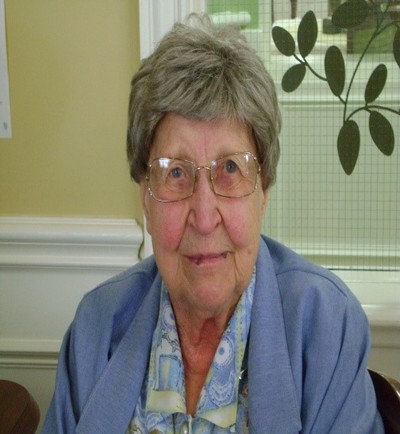 Amélia was born in Saulnierville, Nova Scotia, on April 5th 1920 in a family of six children. Having become a widow without children, at the age of 35 she entered the novitiate in Moncton and became a Fille de Jésus in 1959.

As Amelia had taught school several years before becoming a nun, she pursued her teaching experience for two years, first at Barachois, then at the Commercial Course in Dalhousie.

She then served first as assistant administrator at the Dalhousie Hospital and then as administrator of the MacGillivray Guest HomeomeHHH in Sydney where she worked for more than 15 years. On November 24th 1987, the Knights of Malta presented her with a medal and certificate for her fine work with the elderly.

Amélia was welcomed by the community of Rogersville where she co-ordinated pastoral care for the elderly. Her involvement with the Seniors’ Home, the parish and the community brought her much joy and she kept very good memories of this experience which lasted six years. She was then appointed Director of the Seniors’ Home in Grande Anse and the following year Superior of the community in Sydney. In 1999, she became involved in volunteer work in Saulnierville for three years.

Amélia was then called to the Provincial House where she was in charge of the sick and elderly sisters for the next four years. The time had now come for her to take a well-deserved retirement; she was 86 years old, but that doesn’t mean that she became inactive. As long as her health permitted her, she provided many small services according to her possibilities and the needs of the house. Like most sisters, she felt somewhat distressed on leaving the Vice-Provincial House and coming to Canterbury Hall in Riverview, but she got used to her new home fairly quickly and continued to appreciate the good side of life. The celebration of her hundredth birthday by the community and her family on April 5th 2020, had to be postponed to a later date, given our situation of confinement caused by the virus COVID-19.

Amelia was a pleasant, wise and open person. For a number of years, she was active on the Committee for Retirement and Mission, in the Seniors’ organization ‘‘La Vie montante’’, in the group of elders ‘‘Move or Get rusty’’. She made many friends wherever she went and was loyal to them, as they also. Amélia was not lacking in imagination to organize outings for the delight of many Sisters, but which also met her personal need for relaxation and relationships. Everything interested her: museums, concerts, conferences, friendly gatherings, travel… She was very grateful for the blessings with which God had filled her life and never spend a day without giving thanks.

On  May 22 2020, it was in a spirit of trust and serenity that she left us to meet the God who had chosen her and whom she served with love and generosity. She was 100   years old and in her 61st year of religious life. May she now enter into the peace and joy of God!