50 years of presence in Haiti

On the occasion of the departure of the Daughters of Jesus from Haiti, we trace the “7 sequences” of the mission of the Sisters from 1969 to 2019.

In 1966, during a Congregational Council meeting in Rome, Bishop Rémy Augustin, then in exile, met Mother Pauline, Superior General, and asked her for Sisters to help educate the poor children of his country. Mother Pauline spoke with Mother St. Auguste Marie, Provincial of Rimouski, who in turn launched a consultation with the Sisters of the Province. The answer was « Yes », but communication difficulties led to a delay in implementing the project. In September 1969, the first four Canadians from Rimouski settled in Bonneau in an unfinished house. There were no doors, no windows, no furniture, but that didn’t dampen their enthusiasm. They wrote: “Life is beautiful and we sing every night as we wash the dishes. We are forced to go to bed early because the draughts put out our oil lamps … »

2 Opening of the school in Bonneau

The Sisters were called to respond to the needs of the community. As one of the founders said: « This question was clear enough to allow us to live the charism of the Congregation to the full ». Very quickly, they discovered that all the school textbooks were in French while the children only spoke Creole. Nevertheless, they had to start somewhere so they found someone who knew French and Creole and thus able to translate the lessons.  Later on, this way of doing things would spread and bear the fruits of inculturation and humanization.

Even if Creole seems easy, in reality it is a complex language. One of the Sisters said: « It was only after more than 6 months that I risked speaking in front of people. Thanks to the help of a missionary who kindly corrected my text for my first meeting with the parents, I was able to avoid some traps that would have made many laugh. After 30 years, I can say that there are still things I don’t understand. Creole is a very different language from our own,  very colourful language in its proverbs and spiral thinking … It’s the language of a people who have lived through hard times and fought for their survival. » 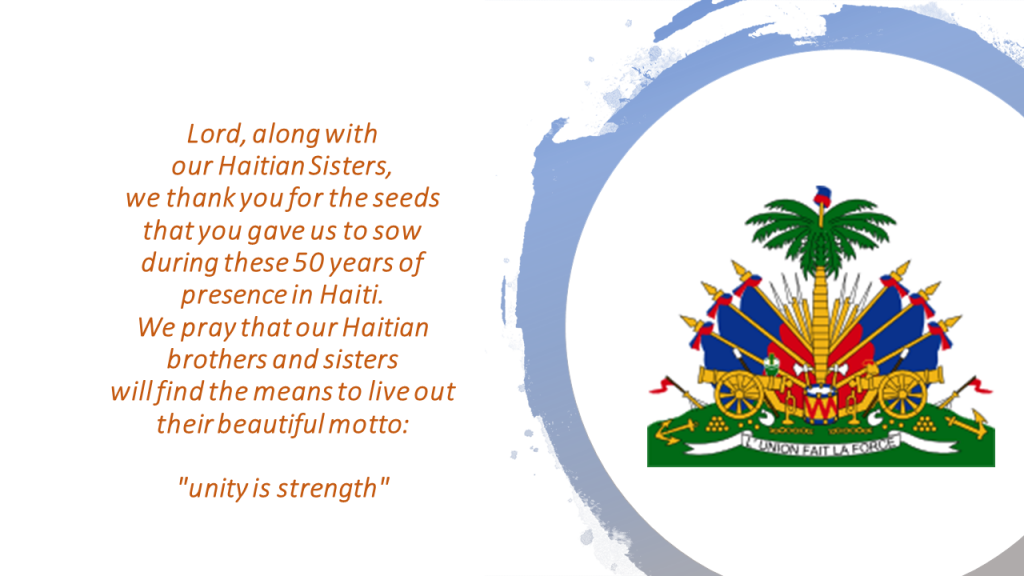 4 The experience of inculturation

“Taking on another culture is a difficult and arduous job that is not done without effort or doing daft things,” said a Sister after a long stay in Haiti. Remaining yourself while taking on another identity, getting closer and closer to people, trying to understand what they are going through… To give you an example,  a Sister and I decided to visit all the families of our students at La Croix. We walked the paths that the children used every day to get to school. It opened my eyes to the reality of the people who lived in the mountains. These trails are often muddy and almost impassable. What courage these children showed, some of them aged 6 to 7 years old. I also admired the determination of the parents to have their children educated! »

5 Working in collaboration with different Church groups and others

Whether in their daily lives or in the hard times, the Sisters lived a great closeness and solidarity in their commitments, especially with the most deprived: – Work in schools and training centres – Work with villagers to improve their living conditions… – Weekly meetings of juvenile prisoners in connection with the Missionaries of Charity, street children, Caritas…

6 In the turmoil, to leave or to stay?

In 1994, during a coup d’état, a message was sent out from the Canadian Embassy stating : “All Canadians whose presence is not absolutely necessary must consider leaving as soon as possible because we can no longer ensure your safety. “It was a big decision to make. The General Council of the Congregation left everyone the freedom to make their own choice. Some left and then returned, courageously resuming their missionary work. Others chose to stay in Port au Prince and at La Croix. In a spirit of solidarity, by trying to overcome their fears, they lived the painful events due to the political crisis in close proximity to the population.

7 Daughters of Jesus in Haiti for 50 years, for what presence?

A French Daughter of Jesus who lived in Haiti expresses the meaning of this presence in this way :

– It was a question of revealing through our proclamation but above all through our way of being, the Christ who took our human condition, revealing it in all its humanity, this humanity that is so forgotten, so flouted in situations of poverty, unemployment, injustice, corruption, lies…

– We helped those whom we worked alongside to become aware of their responsibilities so that things might change, and mentalities be transformed.

– We gave priority to the most disadvantaged, the forgotten who are abandoned on the side of the road.  A translation of our charism: “To Honour the Sacred Humanity of the Son of God. “ (Rule of Life no 3)